Here’s What Happened Next

It’s been nine days since our cat Lucy went missing. Last Wednesday I mentioned that she was gone, and you were all amazingly supportive; I didn’t get back to respond to all of the comments, but your words of comfort and assurances that you were sending prayers/love/good thoughts her way meant a lot to me. Anyone who says internet community isn’t real community can bite my left foot. You guys are fantastic.

That was Wednesday, and I’ve been… well, fine, mostly. The kids are back to school and on something that at least resembles a routine, the house has been cleaner than it usually is  because that’s a thing I’m trying. I haven’t been writing much (fiction or blog), because it turns out that AJ is right: I can’t focus on more than one creative outlet at a time, and I had a deadline on a doll and some ponies.

Of course, I’ve also been distracted, worrying about this naughty little cat of ours. You know, for a long time I’ve suspected that she was a ninja or some sort of feline superhero, and that’s why she insists (loudly and incessantly) on going out so much. Perhaps, I thought, she’d been captured by her arch-nemesis, Or maybe a nice family had invited her in out of the rain, and she hadn’t been able to get out and come home. We did what we could, contacting the SPCA with a description in case someone brought her in, and they put her picture up on their Facebook page. We worked on posters to put up on the three bulletin boards in town.

I knew she would come home if she could. Remember this? 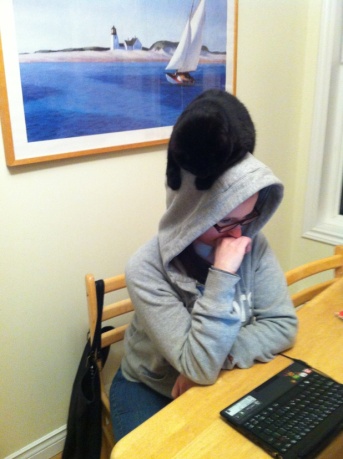 This is not a cat who stays away longer than she has to.

But yes, I was worried, and I know I wasn’t the only one. AJ wasn’t talking about it, but he’s been leaving the front and back porch lights on all night, every night, just to make sure Lucy knew we were home. I figured I would know he’d given up when he stopped doing that. As for me, I’ve been preparing myself for the worst, trying to ease my brain into the idea that she might not be coming back, that we might not ever know what happened to her.

And I’ve been dreading talking to the kids about it.

But life goes on, and this morning I managed to at least crank out a few pages of writing notes before I took Jack for his walk. We’d been gone for about twenty minutes when my phone rang. It was AJ, but at first I couldn’t hear anything.

“IS THAT LUCY?” I said, already crying. Yes, I was standing there by the side of the road in Noggin Cove, NL, tears in my eyes, voice trembling.

No, Lucy hadn’t phoned me, but she had come home. AJ was still in bed when he heard a cat at the door. At first he thought that Harriet had got out when I left, but it didn’t sound like her. When he opened the door, Lucy came in, telling him off (or saying hello, it’s hard to tell with cats). She was yelling at him for treats when he called.

I got home in record time.

She’s fine. Maybe a little thinner than she was the last time we saw her, not that there was much to lose, but fine. Clean, healthy, undamaged. Sleepy and hungry, but that’s actually normal for every cat I know.

We might never know where she was for more than a week, or why. I’m sticking with the feline superhero thing, and yes, you can bet my brain has already made up a story about it for my older son’s age-range. But that will have to wait. For now, I have a sleepy kitty to cuddle.

Thank you all again for the love and well-wishes. I’ll tell Lucy all about it when she wakes up. 🙂

Kate Sparkes was born in Hamilton, Ontario, but now resides in Newfoundland, where she tries not to talk too much about the dragons she sees in the fog. She lives with a Mountie, two kids who take turns playing Jeckyll and Hyde, two cats, an intentional boxer and an accidental chihuahua. She's the author of the bestselling Bound Trilogy (mature YA Fantasy). www.katesparkes.com END_OF_DOCUMENT_TOKEN_TO_BE_REPLACED
This entry was posted on Monday, September 9th, 2013 at 4:41 pm and posted in Pets. You can follow any responses to this entry through the RSS 2.0 feed.
« Not So Much With the WIPpet Today
WIPpet Wednesday: Lucky You »

15 responses to “Here’s What Happened Next”