KL (Kathi) Schwengel, author of the Darkness and Light series, recently presented me with a most unusual proposition. An offer I couldn’t refuse, really. I mean, how many beta readers not only get to have characters from the book visit them, but get to be interviewed by them? I’m a little nervous about having Bolin over; I may have made some comments in my beta reading notes that weren’t exactly flattering. But hey, that should be fine, right? He has no idea. At least Donovan’s not coming, which is good. He’s quite a nasty bad guy. Oh, and Kathi promised to bring Berk, who’s a new character in Emergence who I kind of… well, he’s adorable. And I’ve admired Ciara since First of Her Kind, so–

*knock at the door*

Eek! Oh, and for anyone not familiar with the conventions, asterisks like those up there denote actions, everything else is speech.

*Kathi enters the room beside Ciara, followed by Bolin with Berk trailing behind. Kate welcomes them warmly, taking Berk by the arm and guiding him to a seat beside her on the settee. Kathi and Ciara claim chairs on the opposite side of the low coffee table. Bolin stands beside Ciara, one hand resting lightly on her shoulder, the other on his sword, finger tapping the pommel. His eyes narrow on Kate, and Berk shifts uncomfortably.*

Kathi: Hi Kate, I’m so glad you agreed to let us stop by. Thanks again for taking the time to Beta read Emergence. I really apprec–

Bolin: I read your comments.

Bolin: It seems you’ve lumped me into the same general category as Donovan. I’d be insulted if it weren’t so ludicrous. Is there something in particular I did to earn your ire?

Kate: *glares at Kathi* It’s not you. It’s me. I mean, it is you, but I… Some of your attitudes seem to… *eyes Bolin’s sword and shifts closer to Berk* You’re growing on me. Really.

Ciara: You have to understand, Bolin is under a lot of pressure. *glances Kathi’s way* It’s really not his fault.

Berk: *grins, flashing those adorable dimples, and leans closer to Kate* I read your comments, too.

Bolin: Did anyone ask for your input, soldier?

Kathi: Ease up, General. We’re all here to ask Kate about her experience Beta reading Emergence. This isn’t an episode of the Dating Game. *ignores Bolin’s scowl* So, Ciara, let’s start with you. What would you like to ask Kate?

Ciara: What would you say was the hardest thing about…*waves hand in the air* What’s it called? Bayduh reading?

Kate: *tears gaze away from Berk’s dimples* I think the hardest thing for me is always finding a balance between enjoying an amazing story and acting as a critic. In this case, there were times when I was able to find constructive things to say, but I held back a bit, knowing that a lot of the things I wasn’t comfortable with were just because my world tends to be a bit less dark than yours. I fall in love with these characters and then see them– you– go through horrible things, I get caught up in the story and still have to be critical of what’s working or not for me as a reader…

Actually, that’s a lie. The hardest thing is sending notes off and then living in fear of Kathi’s flying monkeys paying me a visit in the middle of the night. All that other stuff was second-hardest.

Anybody want another drink? It’s getting uncomfortable in here. I mean, warm.

Kathi: We don’t want to put you to any trouble, Kate. Berk, do you have a question you’d like to ask?

Berk: I’d love to. Was there anything that surprised you when you read our tale? Something–or someone–who caught you off-guard?

Kate: Well, since you mention someone, I’d say that yes, I was caught off-guard several times. Without spoiling anything for readers, I wasn’t expecting Bolin to have any competition for Ciara’s affections.

Kate: Especially such charming competition. *Berk tries his best not to look at anything, especially Bolin.* Usually in a situation like that, it’s fairly obvious that one guy is THE ONE TRUE LOVE and the other is a distraction. Not so, here. I actually had no idea how this was going to end. Ciara’s a lucky lady.

But not just that. I also wasn’t expecting to see the villain roster fill out so much, which was a very pleasant surprise. Instead of just continuing with one Big Bad Guy (and one terrifying hag), we got a whole lot of bad coming from a few different directions. Not much fun for all of you, I imagine, but it made for compelling reading.

Kathi: Well, Kate, I think we’ve taken up quite a bit of your time. *glances Bolin’s way* Um, before we go, are there any questions you have for me, or any of the others?

Bolin: I don’t get to ask her a question?

Kathi: I believe you already did. It’s Kate’s turn.

Kate: I’m actually curious about Bolin’s question… unless “ask her a question” is a euphemism for “stab her repeatedly,” in which case we’ll just move along.

Bolin: I would never raise my hand to a lady. Nor would I stab you repeatedly. One clean thrust is all that’s needed.

Kate: Um. Yeah. Oh, so many questions! I don’t want to spoil anything for future readers, though. I guess my question for Berk would be “do you want to hang out here for a while,” but I’m expecting my own characters back soon, and that could get weird.

Male voice from another room: It’s only weird if you let it be weird!

Berk: I’m not sure what ‘hanging out’ is, but I wouldn’t mind–

Kathi: Probably not a good idea, Berk. We don’t want to start any inter-novel squabbles or anything.

Kate: *sigh* Well, this has been fun, and I’ve enjoyed meeting all of you. You know, I think I’m actually going to let my questions rest for now, wait and see what happens as the story continues. Also, I think any question I ask is only going to piss Bolin off more, so… actually, one question for Bolin. Can we call a truce here? I know we’ve had our differences, but I do respect you as a character, even if you occasionally rub me the wrong way. *winces* Can I say that and not have you hurt me?

Bolin: *tips head politely* It has been a pleasure, lady. I look forward to our next visit. *offers Ciara a hand*

Berk: I am, technically, off duty. Are you sure I couldn’t stay for–

*Bolin raises a brow, Berk frowns and leaves the room.*

Kathi: Thanks for putting up with us, Kate. And huge thanks for being such an awesome Beta reader. Now, shouldn’t you be writing or editing or something?

Male voice from another room: Make it “or something!”

Kate: *yells* You have no idea what you’re in for when I get back to writing, mister! *to Kathi* Merfolk, am I right? Wow, thanks for bringing your people by. I must be the luckiest  beta reader ever!

Kathi: *pauses at door, glances toward the other room, bites her lip.* Um…tell you what, why don’t you all go on without me. I think I’ll stay and visit with Kate for a while. See you back in the dungeon! *waves and quickly closes door* Now, who’s all in the other room?

If you enjoyed this and would like to get to know these characters better, check out First of Her Kind and Emergence, available in ALL THE PLACES! Click here for links.

Thanks to Kathi for bringing her characters by, and for leaving the monkeys at home. It was fun! Weird, but fun. 😉 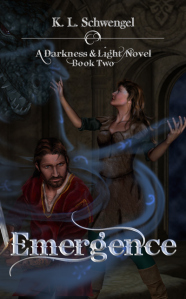 Kate Sparkes was born in Hamilton, Ontario, but now resides in Newfoundland, where she tries not to talk too much about the dragons she sees in the fog. She lives with six cats, two dogs, and just the right amount of humans. USA Today bestselling author of the Bound Trilogy (mature YA Fantasy), Into Elurien, and Vines and Vices. Writing dark, decadent, and deadly Urban Fantasy as Tanith Frost. www.katesparkes.com www.tanithfrost.com END_OF_DOCUMENT_TOKEN_TO_BE_REPLACED
This entry was posted on Thursday, March 20th, 2014 at 9:14 am and tagged with author, beta reader, beta reading, characters, fantasy, interview and posted in author interviews, books. You can follow any responses to this entry through the RSS 2.0 feed.
« WIPpet Wednesday: Gempunk Edition
The Good News and The Bad News (call for beta readers) »