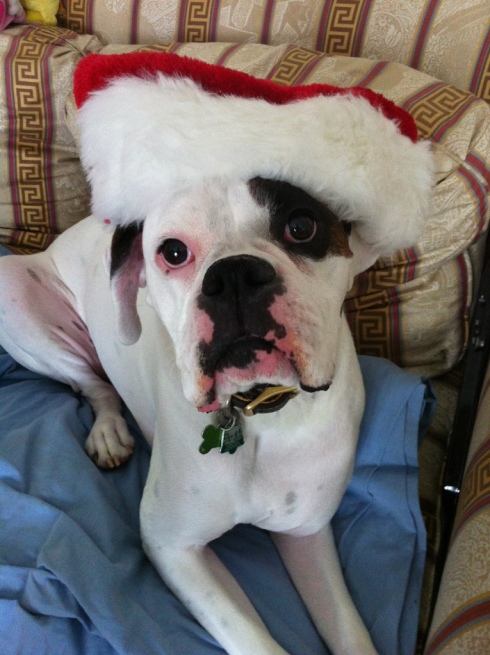 This is not what I’m supposed to be doing…

It’s close, but not close enough.

I’m supposed to be writing, but not here. Writing here does me very little good, actually. Oh, it would be fun to talk about the lovely Christmas we had and how thankful I am that no one here got that nasty stomach flu until today, but really, that’s not going to help me at all.

No, what I’m supposed to be working on is the first five chapters of Bound. I thought it was done, I really did, but so much rests on those first few pages. I’ve been very fortunate to have a few helpful critiques on the first chapter (posted on Scribophile.com)- some comments I agreed with, some I didn’t, but all were helpful. Generally, people like how the story looks, they like the first main character I’ve introduced, they have no problems with my grammar, spelling, or dialogue. One person had nothing negative to say at all, really. Another pointed out that I do too much telling, and that… that, I agree with.

It’s hard, you know, creating a world and then setting a story in it. Wait… that’s not quite right. Creating a world is amazing and fun, and I can’t imagine putting this particular story anywhere else. No, what’s hard is getting a reader to understand this world you’ve created without dropping giant Acme anvils of information and background on their heads, which does tend to distract from the story somewhat.

Here’s my problem right now: I have this lovely world with magic. Sorcerers, dragons, flying horses and winged people, spells and enchantments and mysteries. And I have a country right smack in the middle where the people hate magic. They’re terrified of it, actually. And across the mountains I have people who almost take it for granted… and there’s a war brewing between the two. I have a missing king and connections to our world and a magic system with details and rules and consequences. I understand all of this. But I need to make my reader understand it, too, without turning the book into a history lesson.

There seem to be two main ways I could go about this- two ways I’ve seen it done, and two ways it’s been suggested that I accomplish it. The first is to say, “screw it, take your history lesson and like it.” It would probably be shoved in after something exciting enough to (hopefully) hook the reader has happened. The advantage, of course, is that people have no excuse for not knowing what’s going on. The disadvantage is HELLO BORING.

Option 2: Just get on with the story and trust that readers will follow along until it makes sense within the story for me to answer the questions that will undoubtedly pile up. How can someone control another person’s mind, or change into an animal? Where does the magic come from? Why don’t all people have it? Where did these magic-haters come from? I might tell you if it’s important, but you’ll have to be patient. Just accept it on a “because I said so” basis for now. This seems like the better option. I trust my readers’ intelligence.

So here I am, trying to figure out how to get the immediately-important information out there without having my main character just telling us about it. Not that that would be a problem, mind you; Rowan loves to talk. Drives other people crazy with it. It would be much more interesting to see these things, though- to show her people’s attitudes toward magic in action rather than have her tell us, “BTW, my people, like, totally hate the magics.” *

What does this mean? It means that I might be almost completely scrapping a beautiful opening scene that has too much telling and doesn’t let me show much. It means that in amongst all of this showing, I need to give the reader reasons to keep going- because another thing I have is a young woman who doesn’t want to get married, and though it’s important to the story and to her as a character, I’m aware that this is an issue for a metric tonne of Young adult heroines. She’s going to get past that little issue quickly, but still… I can’t risk people going, “Ugh, this shit again. Booooring…” and leaving before the whole kidnapping/being rescued by a bad guy thing happens. Because believe me, it only gets better from there.

So OK, here I go. Scrap most of opening scene, re-write other bits… throw in a brand new scene in town with more people to interact with and get information from… possibly change the entire dynamic of her relationship with the guy she’s supposed to be marrying to place less emphasis on that situation (but not too little, because we do need our dear heroine to give up on her childhood dreams for the time being- sigh).

I know, I’m rambling. But really, if you’re reading this, you probably already knew that I’m a bit nuts.

Wish me luck. This is the easy part.

*No, I don’t let my people talk like that. In case you were wondering. -_

It’s OK, Amy. The cookies were terrible anyway. Have at it.

Hanging out with Simon Pegg. Probably not a good idea for a doll who started out as a zombie, but it worked out OK: 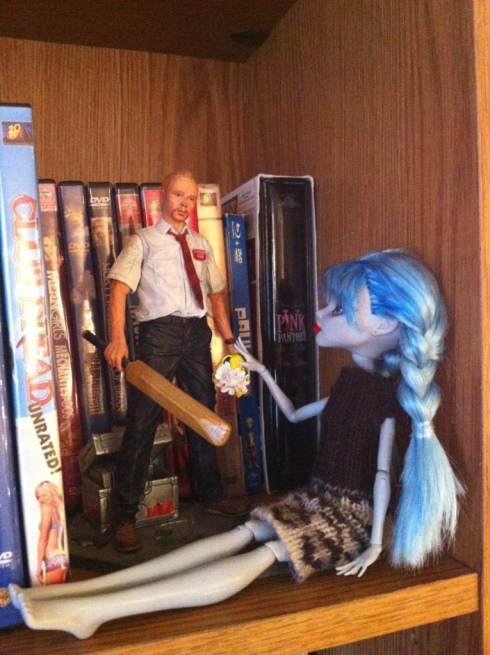 And this morning we found Amy ballet dancing with a pony, which was wearing a tutu and leg-warmers. Because why wouldn’t she be doing that?

I realized today that my husband is a better housewife than I am.

I had to drive 45 minutes to the doctor for my annual poke n’ prod (and not the good kind, either). I spent an hour in Walmart battling the crowds of coyotes and cows, then picked up a few things for my husband. All told, I was gone for 4.5 hours.

He did three loads of laundry, did the dishes, and scrubbed the dishrack.

I’m not saying I don’t do anything, but that’s impressive for someone who’s not responsible for those things.

On top of this, I just turned on the faucet and shot water all over the kitchen (my bad, shouldn’t have left that tiny bowl in the sink) and accidentally put a plastic-handled knife in the oven.

Good thing I’m good at other stuff, eh? Like… Um… Gimme a minute.

In the meantime, Amy Snow! 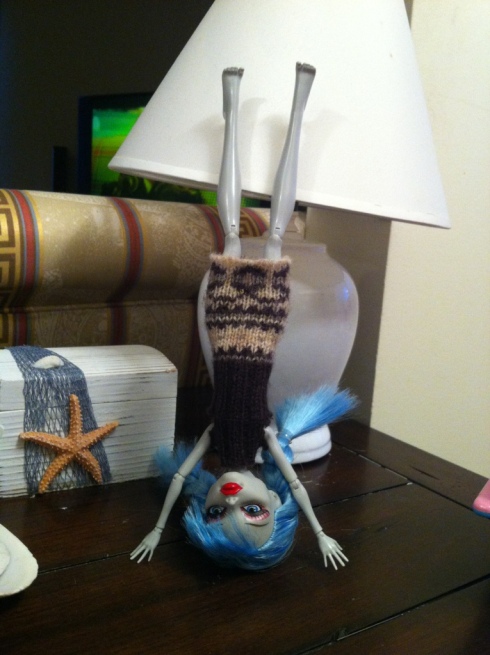 Playing a concert for a few of the baby ponies. 🙂 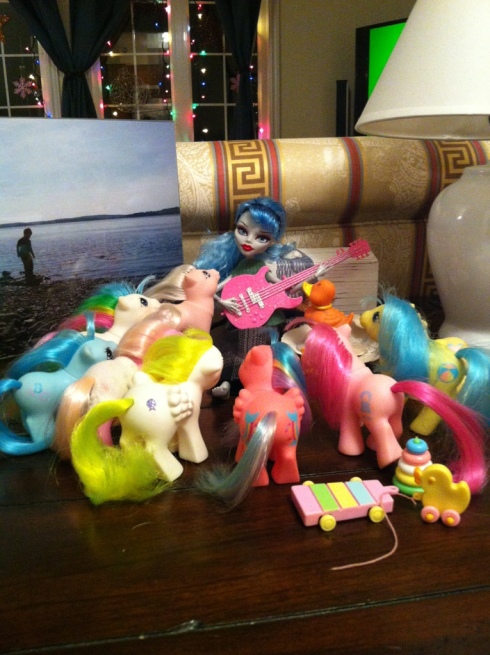 This morning, we found Amy a wee book labelled with the number 15- she must have spent the night catching up on her advent calendar reading. How sweet and innocent! I hope she stays that way- I caught her checking out the green lantern figure last night.

She also helped decorate the tree today. Only tiny ornaments, of course.

So, Elf on the Shelf. I’m going to be honest here: that tiny bastard scares the bejeezus out of me.

Have you seen him? This little toy elf that you buy (I don’t know where, I assume from Hell’s gift shop) and set up every night in random places because… I think the kids are supposed to think he’s alive and reporting back to Santa.

That’s the theory. I think it’s really an excuse for moms to play with toys. No judgement here- I’m the proud owner of… one or two… *ahem*

If you haven’t seen him, google it. I’ll wait. No, not the cute squishy one, the plastic-headed one that looks like he’s going to consume your soul.

He watches you while you sleep. He thinks it’s romantic.

Look at those eyes. That little fucker KNOWS things.

So anyway, I don’t want one of those, because my dreams are surreal enough without adding something to the mix that’s clearly food for night mares. But I do want in on the fun. My kids do, too; they’re still young enough to really enjoy a little Santa magic, and a doll who’s buddies with Santa sounded like a great idea to them.

She lost the glasses and traded her tarty dress for something a bit cozier, and the boys named her Amy Snow. I know, the outfit looks like Cinderella’s hand-me-downs, but it took me three hours to make.

Point is, the kids love her, we’re going to have a lot of fun with her, and she doesn’t give me the heebie-jeebies or whisper in my ear that I should stab things.**

I’ll post some of her adventures here. For now, here’s Amy checking out the new decorations:

** I just assume that the elf does this.

No, not NaNoWriMo- that IS over, but I’m not celebrating it. I’m celebrating my win (over 70,000 words), but I’ll miss it a lot. The writing buddies, the forums, the pressure to just get through those tough spots and keep going, the permission to put off washing the floors in favour of writing… I’m sad to see all of that go.

No, what I’m celebrating is the end of Movember. I know it’s a good cause, I just really dislike mustaches in general. Tom Selleck is allowed to have one. The guys in the movie Tombstone can keep theirs and I’ll still watch it. My father-in-law can also keep his, because it suits him and I’m not entirely convinced that he actually has a lip under there. But not his son. My husband has fine, blond hair. He was not pleased with the results of his lip-hair experiment, and I don’t like prickly face. Not fun for either of us.

I donated money. I tried to be supportive. I’ve even said that next year we can match the donations he got this year if he’ll give the money to someone else. I think he was a little insulted by that… But I still don’t like Movember.*

He’s been itching to shave for the past week. I’m proud of him for sticking it out, but HOORAY, it’s over!!!

Now if you’ll excuse me, I have floors to wash. Right after I figure out how to get two mer folk, a sorcerer and a semi-unconscious sorceress out of a well-guarded enemy fortress, while stopping to rescue a deposed king on the way.

What? Fun habits die hard. The floors can wait a little longer…

*huh. Autocorrect knows the word “Movember.” Not NaNoWriMo, though. I wonder what I can grow for insane writing challenge awareness?