Scrivener vs Yarny: Battle of the Writing Thingamajiggers

Remember when my computer died? That was sad. I do have a working replacement, but I’ve run into a problem:

It won’t run Scrivener for shit.

Not familiar with Scrivener? It’s a “non-linear” writing program originally developed for Mac (and which still has more features for Mac), but that was beta testing in 2010, just when I was doing my first NaNoWriMo. We’ll talk about features and stuff later. For now, I’ll just say that it’s been a life-saver for me, and works SO much better than Word/OpenOffice for working on a novel.

It worked fine on my old netbook. Occasionally it would go all (not responding) when I first started it up, but it always got over that pretty quickly, and everything was smooth sailing from there on in.

Now, not so much. On the “new” netbook, I can’t type ten words without it going (not responding), and half the time I’ll lose whatever I typed during the time it took for the program to come back. This leads to some odd, disjointed sentences, not to mention a lot of tooth-grinding, hair-pulling, “why am I even bothering” frustration.

It sucks, is what I’m saying.

I don’t know what the problem is. There’s a ton of memory space on the computer, and everything else runs fine. Would reinstalling the program help? I have no fecking clue. Tell me, please. (UPDATE: reinstalled, improved somewhat, still want a better computer)

Until I get it figured out, I have a few options: I can use OpenOffice, which doesn’t work for me until I get to the final editing stage, and even then I find it very frustrating not being able to just jump to whatever chapter and scene I want. Or there’s Yarny, which has many of the features I like from Scrivener, is online, and is free.

I’ve used Yarny for short stories before just to try it out, and I like it. Not as much as Scrivener, but… well, you know where we are with that. And it has some distinct advantages.

I don’t have a choice about what I’m using right now, but for anyone who’s curious about these programs, I thought I’d outline the features I use in each, the benefits as I see them, and the disadvantages. Because why not?

Click on the names for some far more professional information!

I don’t know how I wrote anything before I tried this program (which offers a free 1 month trial and a huge purchase discount for NaNoWriMo winners). Oh, wait… I didn’t. Nothing that got long enough to be unmanageable in OO, anyway.

It’s a brilliant program, and I don’t even use half of the available features. Here’s how it works: You open a new project, and select what you’re writing: a novel, a screenplay, whatever. There’s a template for that! Let’s go with novel, shall we? Lovely. Here’s where it blows regular word programs out of the water: Each chapter is its own little folder, and they’re all lined up on the left side. Each scene can be written separately, as text within the folder. What’s the advantage of that? Two things: one, they’re all right there, and you can click on whatever scene you want to work on. Also, you can move them around! It’s fantastic. Drag and drop a scene to a different chapter, move it outside of the manuscript so it’s handy if you don’t want it right now but might need it later, rearrange scenes within a chapter to see how that looks, move them back. No highlighting, no cutting and pasting, no “where the heck did I put that?” 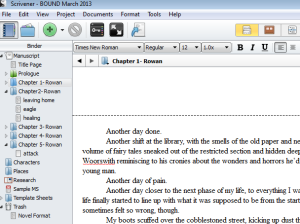 If this was the only feature worth mentioning, I’d still say the program was brilliant and worth what I paid for it.

But there’s more, and you can take a tour on their site here. If you like organizing scenes, etc. on index cards so you can storyboard before you write, they’ve got those. Make notes on them, move them around, color-code them, note what stage of writing each scene is in. Like to make a ton of character notes, or have outside reference materials you’d like to keep handy? There’s a place for those. Bring ’em on in! 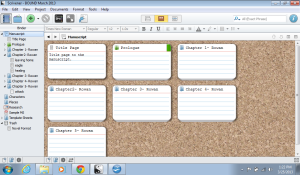 And then at the end, you hit compile, choose your format (.doc, .rtf, .whatever), and there’s a professional-looking manuscript all prepped for you. Everything’s in the order you chose, nothing is included that you don’t want (like all of those character notes. Nobody wants to see that).

It’s professional-looking and easy on the eyes, and once you get the basic idea of what’s happening, it’s easy to use. There are advanced features that might be tougher; I don’t use ’em. They’re there if I need them, and there are lots of online tutorials.

EDITED TO ADD: I can’t believe I forgot this! Scrivener saves automatically every time you stop typing for a few seconds. This means that if, say, your 7-year old son (not looking at anyone specific right now) closes the program while you’re letting him use your computer, you won’t lose your work. Gotta love that.

Yarny looks very different from Scrivener. It’s bright, it’s simple, it’s in your web browser. It offers the same basic feature I gushed about in Scrivener: you organize your project in “groups” (in a novel, these would likely be your chapters) and “snippets” (your scenes), and these can be moved around as you see fit. It also offers a space to put the extra stuff that’s not part of your document; it’s not as multimedia-compatible as Scrivener is, but there’s room for character sketches and world-building notes. 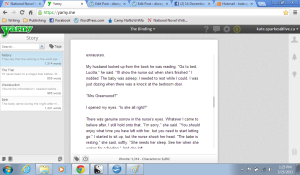 This was a short story, so there were no groups, only “snippets”

It is lacking in a lot of the features Scrivener offers: no index cards, none of the features I don’t use anyway (seriously, watch the scrivener video if you’re curious). I can’t say how it works for compiling projects, but it does connect to “publification,” whatever the heck that is**. Formatting is a bit of a problem, too; you can italicize *like this,* but if you then copy to another program, you’re screwed.***

There are advantages, though. For one thing, it’s free. You can upgrade to a paid version, but I don’t think the added features are worth the cost yet. Even better is the fact that it’s online. You’re “writing in the cloud,” and it saves your work automatically. No more paranoia about what happens if your computer crashes or your house burns down and takes everything with it, no more e-mailing chapters to yourself just to be sure. I’m not the only one who does that, am I?  I do wish they had an option to work offline, though. Not everywhere I work has internet access.

Another good feature is the part where you start typing away, and everything except for your work disappears until you need it again. All of those groups and snippets are gone. It’s just you and your page and your words.

One word of caution: If you somehow get signed out during a session, you will lose what you write when you’re not signed in. It’s only happened to me once, but it ticked me off.

EDIT: I didn’t even get signed out and it just lost a few hours’ work. Not impressed.

See all of the features here

So what does this all mean? For me, there are advantages and disadvantages to both programs. Generally, I prefer Scrivener. It has more weight to it, I’ve used it successfully in the past, I like the bells and whistles, and it’s never lost 2 hours’ work (well, not since beta testing updates). But if it’s not working for me right now, I’ll give Yarny a shot.

If you’re writing and think the features of either sound nifty (and I really haven’t taken enough time to do them justice today), I recommend giving them a shot. Neither costs anything to try. Of course, neither will bake you a better writer, but they might help you be a more efficient and organized one, and that can’t be a bad thing.

**So, Publification. It’s all about the e-publishing. That’s all I know, but there’s more info here

*** Scrivener’s formatting doesn’t transfer, either, but you don’t have *these* to deal with. And it all comes out properly when you compile, just not if you copy and paste.

Kate Sparkes was born in Hamilton, Ontario, but now resides in Newfoundland, where she tries not to talk too much about the dragons she sees in the fog. She lives with a Mountie, two kids who take turns playing Jeckyll and Hyde, two cats, and one chihuahua. USA Today bestselling author of the Bound Trilogy (mature YA Fantasy) and Into Elurien, writing dark, decadent, and deadly Urban Fantasy as Tanith Frost. www.katesparkes.com www.tanithfrost.com END_OF_DOCUMENT_TOKEN_TO_BE_REPLACED
This entry was posted on Thursday, April 4th, 2013 at 9:46 am and tagged with comparison, personal experience, review, Scrivener, Yarny and posted in Product Reviews, writing. You can follow any responses to this entry through the RSS 2.0 feed.
« WIPpet Wednesday- Night in the Garden
Letter From Camp »

23 responses to “Scrivener vs Yarny: Battle of the Writing Thingamajiggers”