ROW 80 Update: This does NOT happen edition

So my husband came home last night, long after I was in bed and asleep. He’d had a long, difficult weekend already (and it was barely even Sunday), but he managed to take a few minutes to stop by the goodbye party for the guy he works with. He told me, “there’s a surprise for you in the fridge.”

I LOVE fridge surprises! I did mumble something about how if it was roadkill I’d be very disappointed, but really there was only about a 14% chance of it being that.

And then, being mostly asleep, I forgot about it.

This morning, AJ said, “did you look in the fridge?”

I ran to the fridge like a hyperactive little kid hunting for Easter eggs, expecting maybe a chocolate bar (because sometimes AJ’s cool like that) or a bit of dessert from the party.

I was not expecting… THIS: 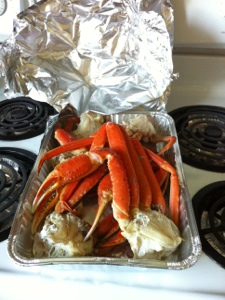 Pardon my language, but HOLY SHIT THAT’S A WHOLE LOT OF CRAB LEGS.

There was also deep-fried turkey, hashbrown casserole, and… I don’t know, ham or something. I kind of forgot about all of that when I saw the HOLY SHIT CRAB LEGS.

Do you guys have any idea? DO YOU?! The fact that I’m yelling might tell you that I like crab legs a lot. What you might not have guessed is that I haven’t had them in years. They’re expensive, and there aren’t many restaurants around here that serve them (at least, not at a price I can pay). I think the last time I had them was at Mandarin Buffet in Ontario, when my mom and I pretty much ate everything.

I’m not ashamed of that.

Not all of the surprises I wake up to are pleasant; cold cat barf squishing between my toes comes to mind when I consider the less-pleasant ones. But today… today shall live in my memory as a day of celebrating fathers (hi, dad!), unexpected blessings, and HOLY SHIT CRAB LEGS! God bless generous people with too much food at their parties.

Now, about that Round of Words update (now that I’ve frightened everyone away): through an intense regimen of BICFOC* and all but neglecting my children, I’ve passed the 20,000 word mark for JuNoWriMo. There’s still a long way to go, and I’m not quite on track, but I’m catching up. I’m reading a little when I can, but on rainy days when I’m stuck inside, it’s all about the writing right now. I’ve started looking for an editor for Bound, though I won’t need one until after this round of revisions and a blasting from beta readers… and then more revisions… but I’m putting feelers out there. That wasn’t a goal, but it’s related, so there you go. Also not an official goal, but I’ve been reading a bunch of ROW80 blog updates from people whose blogs I don’t normally follow, and commenting. I feel good about that, and it’s fun; you never know what you’re going to find out there in Blog Land.

Now if you’ll excuse me, I have more running around in circles and screaming to do before I go warm the butter.

That’s not a euphemism.

*Butt in chair, fingers on keys

Kate Sparkes was born in Hamilton, Ontario, but now resides in Newfoundland, where she tries not to talk too much about the dragons she sees in the fog. She lives with six cats, two dogs, and just the right amount of humans. USA Today bestselling author of the Bound Trilogy (mature YA Fantasy), Into Elurien, and Vines and Vices. Writing dark, decadent, and deadly Urban Fantasy as Tanith Frost. www.katesparkes.com www.tanithfrost.com END_OF_DOCUMENT_TOKEN_TO_BE_REPLACED
This entry was posted on Sunday, June 16th, 2013 at 9:06 am and tagged with Crab, surprises, writing and posted in random, ROW80, Torn, writing. You can follow any responses to this entry through the RSS 2.0 feed.
« Quote of the Week
Science Fiction Writing with Ray Bradbury »

14 responses to “ROW 80 Update: This does NOT happen edition”