Guys, I’m so excited right now. Want to know why?

Because today we welcome Ruth Nestvold as she reveals the cover of her new novel Island of Glass.

Ruth is a great writer, and I’ve been enjoying snippets from her work SO much. Even out of context, her writing is always strong and captivating. I can’t wait to read this one! After reading excerpts, I feel like it’s going to be one of those rare “holy crap I wish I had written this thing” books. Needless to say, I’ve pre-ordered.

Okay, that’s a lie. Amazon.ca won’t let me pre-order, because sometimes it’s a jerk like that. But I’m signed up for a notification when it’s available. 🙂

Without further ado… Island of Glass. 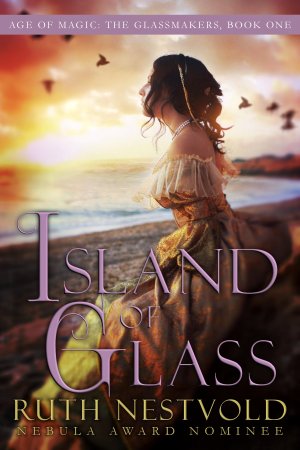 Seventeen-year-old Chiara Dragoni is a master glassmaker of Venice, a position that is both a privilege — and a trap. For the glassmakers of Murano are forbidden to ever leave the islands of the Venetian lagoon.
When Chiara’s uncle is caught on the mainland and thrown into the dungeon of the Doge’s Palace, she must use all her talents, including magic, to help free him. But the gift she creates for the ruling prince of Venice has unintended consequences, and now Chiara must decide whether to give up everything — and everyone — she knows and loves in order to save her dream.

Set in an alternate historical Venice with alchemists, witches and magic, the story uses familiar motifs from the beloved fairy tale “Cinderella” to tell a tale with a very different message.
Island of Glass is a Young Adult fantasy novella of approximately 25,000 words, or 100 pages. It is the first book in The Glassmakers Trilogy.

Now available for pre-order for an introductory price of only 99c!

The prince chuckled, placing the second slipper next to its mate on the gilded side table. “Most young women scheme for the opportunity to be alone with a prince of La Serenissima. Yet here you are, offered the chance, and you turn it down.”
Chiara didn’t know what to say. She could only hope that beneath his smiles and chuckles he wasn’t offended. Her plan to gain the prince’s favor was backfiring badly.
“Talented, beautiful, and unusual,” the prince continued. “And quite rich as well, I presume?”
She could tell from the heat of her cheeks that they must be flaming by now. She nodded mutely.
He raised one expertly plucked, aristocratic eyebrow. “And you want me to free your uncle.”
She almost heaved a sigh of relief at his change of subject. She hoped that was the end of his attempts to flirt with her; flirtation was not one of Chiara’s strong points. “The Fenice Glassworks cannot be run properly without Gianfranco Dragoni,” she said. “Surely the Council of Ten cannot wish for such a situation. The taxes we pay are an important source of revenue for Venice, after all.”
He didn’t answer, staring instead at the matching glass slippers. “I wonder if they would fit me. They look to be my size.” He glanced at her again with a suggestive smile. “As if you knew me intimately, my dear.”
Oh, no, she hoped he didn’t intend to actually try the slippers on! They were decorative, not meant to be worn. If they broke and cut his princely foot, he would probably throw her into the prison of the Doge’s palace right alongside Uncle Gian.
He sank into the nearest lavishly upholstered chair and snapped his fingers. “Remove my shoes,” he said to the servant who appeared at his side.
Chiara watched the proceedings, trying to remain composed, given her panic at what would most likely happen next.

Chiara wiped her hands on her apron and lifted the goblet up to the light, inspecting her work critically. The fluted glass flared out like a lily beginning to bloom, and as hard as she tried, she could find no discoloring or bubbles. She breathed a sigh of relief: a nearly perfect piece. It would command a high price among the nobles of Venice and beyond.
The work of the Murano glassmakers was in great demand throughout the world. Their craftsmanship was the basis of their riches — and their curse. Out of fear that they might reveal trade secrets, the laws of La Serenissima decreed that members of the glassmaking families of Murano were never to leave the islands of their lagoon. Murano glass was more precious than gold, after all. Anyone who knew the recipe of the alchemists could make gold, but only the artisans of Murano could make glass so fine, one could nearly touch one’s fingers together on either side; cristallo without an imperfection or blemish, clear as the sky, with a sparkle to rival that of diamonds.

Ruth Nestvold’s short stories have appeared in numerous markets, including Asimov’s, F&SF, Baen’s Universe, Strange Horizons, Realms of Fantasy, and Gardner Dozois’s Year’s Best Science Fiction. Her fiction has been nominated for the Nebula, Tiptree, and Sturgeon Awards. In 2007, the Italian translation of her novella “Looking Through Lace” won the “Premio Italia” award for best international work. Her novel Yseult appeared in German translation as Flamme und Harfe with Random House Germany and has since been translated into Dutch and Italian. It is now available as an ebook in the original English.

Find Ruth Nestvold on the Internet:

Kate Sparkes was born in Hamilton, Ontario, but now resides in Newfoundland, where she tries not to talk too much about the dragons she sees in the fog. She lives with six cats, two dogs, and just the right amount of humans. USA Today bestselling author of the Bound Trilogy (mature YA Fantasy), Into Elurien, and Vines and Vices. Writing dark, decadent, and deadly Urban Fantasy as Tanith Frost. www.katesparkes.com www.tanithfrost.com END_OF_DOCUMENT_TOKEN_TO_BE_REPLACED
This entry was posted on Tuesday, October 14th, 2014 at 12:00 pm and posted in cover reveal. You can follow any responses to this entry through the RSS 2.0 feed.
« Fall Into Fantasy: The Heirs of War series by Mara Valderran
WIPpet Wednesday: Mrowl »

2 responses to “COVER REVEAL: Island of Glass by Ruth Nestvold”