Farewell to a Puzzle

His name’s not really Puzzle–not in our world, though I’ve called him that more than a few times. But the blink-and-you’ll-miss-him black and white cat sleeping on Rowan’s bed in chapter two of Bound, the one who’s a little pissed about having his nap disrupted, has a real-world counterpart.

His name’s Charlie. That’s been his name since before we adopted him from the SPCA 12 years ago, and he’s even responded to it a few times. 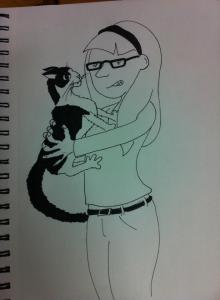 YOU. WILL. LOVE. MEEEEEE.

^This basically sums up our relationship.

He doesn’t go out of his way to be mean, and he has sweet moments with one of our other cats. But he’s generally antisocial, has never liked to be touched our cuddled (save for the occasional scratch under the chin). He jumps at things that aren’t there, and I’m not entirely convinced that he doesn’t think we’re all figments of his imagination. Entertaining, yes. Snuggly… not so much.

He’s been my weirdo housemate for a dozen years, basically Sheldon Cooper in feline form: uncertain of how to give or accept affection (even when he kind of wants it), happiest when left alone to enjoy his favourite spot on the couch. He’s been with us through six moves and three provinces, two kids, four dogs and two rats.

Charlie’s had a good life, or at least a contented (if somewhat paranoid) one. But he’s sick. I won’t go into details, but we’ve seen the vet, we’ve tried treatments, they’re not working.

I’m taking him for his last vet appointment at noon today (so 10:30 Eastern, if you want to send happy thoughts). He won’t be pleased to be there again, but I’ll stay with him until the end no matter how cranky he gets.

And it will be hard. No matter what the circumstances, it’s not easy to say goodbye to someone you love.

There’s no lesson here, no big revelation to end the post. Death is hard, even when it’s merciful, even when letting go is the right thing.

He’ll live on, though, in my heart and on those pages. 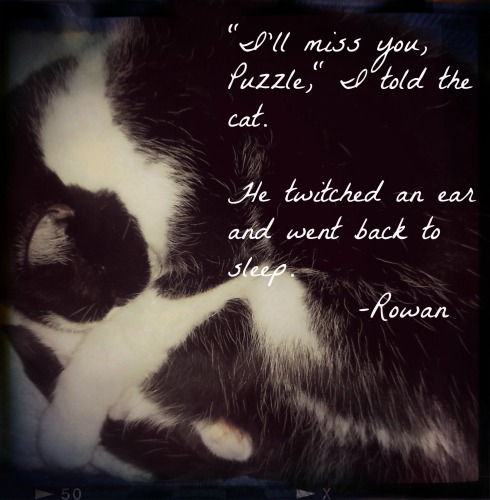 Kate Sparkes was born in Hamilton, Ontario, but now resides in Newfoundland, where she tries not to talk too much about the dragons she sees in the fog. She lives with a Mountie, two kids who take turns playing Jeckyll and Hyde, two cats, and one chihuahua. USA Today bestselling author of the Bound Trilogy (mature YA Fantasy) and Into Elurien, writing dark, decadent, and deadly Urban Fantasy as Tanith Frost. www.katesparkes.com www.tanithfrost.com END_OF_DOCUMENT_TOKEN_TO_BE_REPLACED
This entry was posted on Friday, April 24th, 2015 at 8:01 am and tagged with cat, death, goodbye, letting go and posted in Family, Pets, random. You can follow any responses to this entry through the RSS 2.0 feed.
« WIPpet Wednesday: It’s Love… Really
Cover Reveal: BLOODLORE by Krista Walsh »

8 responses to “Farewell to a Puzzle”