Some of you know that I have a hard time taking a day off, but there are days when it can’t be avoided. Days when the family is all free, the sky is blue (and it happens to not be giving me a headache), and adventure calls.

This past Wednesday was one of those days, and it happened to also be Canada Day.

Instead of blabbering on about the amazing day we had, I thought I’d just share some pictures. It really was fantastic. We packed up and headed to Twillingate (NL) for the afternoon, which is packed with so much natural beauty it’s almost overwhelming. We didn’t get out on a whale-watching tour (I’ll get you guys out for one of those soon!), but we did see some amazing things.

And since the landscapes in the Bound trilogy are inspired by places in Newfoundland (including Twillingate), it seems entirely appropriate to share these here.

This isn’t Twillingate. I took this the night before our adventure when I was out walking the dog. But LOOK AT IT. 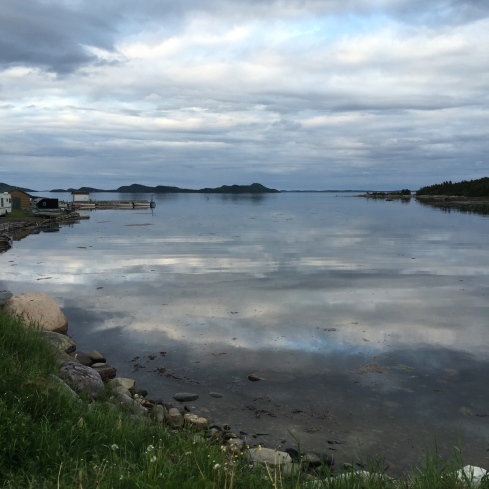 Bright skies and good company. Newfoundland is covered in fantastic spots for hiking, climbing every mountain (or every other mountain if you’re feeling sluggish), and relaxing.

We spotted a sea monster basking near the shore. It stayed very still until we left. Must be shy.

Sand is swell, but I do love a good pebble beach.

And there was some climbing of rocks, because they were there.

The highlight of the afternoon (okay, besides finding amazing praline-caramel fudge at a lighthouse gift shop) was watching an iceberg roll over. The only people there with us to see it were a very nice couple from Vancouver, so it felt like a private show. The berg kept making booming noises, first when a piece fell off and then as it rolled. Very cool.

This is how it looked when we came over the hill:

And then a piece broke off and crashed into the water at the back, sending the whole thing off balance so that it rolled toward us.

At this point I realized, hey, I could be taking video of this, so the last picture is after it stopped turning:

It was fairly amazing. It took about three minutes for this massive chunk of glacial ice to flip completely.

We ended the day with a trip up to the lighthouse at Crow Head, where I found the aforementioned fudge, and we took a little walk behind the lighthouse. 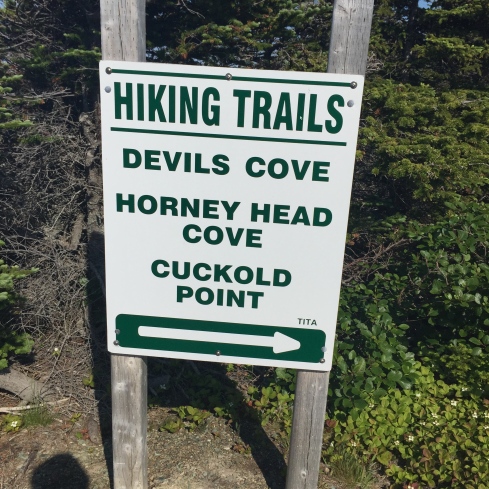 So that was it, aside from a little chilling on my in-laws’ back deck to end the day. I hope you all had an amazing Canada Day, Fourth of July, or whatever else you may have celebrated last week. Let me know in the comments what you’ve been up to!

Kate Sparkes was born in Hamilton, Ontario, but now resides in Newfoundland, where she tries not to talk too much about the dragons she sees in the fog. She lives with six cats, two dogs, and just the right amount of humans. USA Today bestselling author of the Bound Trilogy (mature YA Fantasy), Into Elurien, and Vines and Vices. Writing dark, decadent, and deadly Urban Fantasy as Tanith Frost. www.katesparkes.com www.tanithfrost.com END_OF_DOCUMENT_TOKEN_TO_BE_REPLACED
This entry was posted on Monday, July 6th, 2015 at 10:00 am and posted in Uncategorized. You can follow any responses to this entry through the RSS 2.0 feed.
« It’s My Birthday…
Bound A-Z: J is for “Jumpin’ Jehosephat” »