K is for Kel 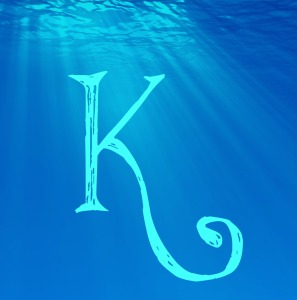 Raise your hand if you were waiting for this one.

Don’t be ashamed. He’s one of my favourites, too. As someone said in a comment on my Facebook page, “The struggle is real! Between he and Aren, I’m thinking polyamory is the perfect choice.”

That commenter is not alone.

For anyone late to the party, Kel is a mer man who befriended Aren when they were both children (though Kel may be a little older). Kel’s band of merfolk are secretive about the exact extent of their territory, but it definitely covers a portion of the sea in the north of Tyrea and several lakes in its interior, which they access via a magical system of caves. It was in the caves near Glass Lake that a young and adventurous Kel met Aren, who was almost old enough to be developing a chip on his shoulder. Kel was never one to pass up a challenge, though, and found the young human interesting enough that he decided to befriend him.

Aren resisted at first, but few people have ever been able to resist Kel’s charms–certainly not a kid with no friends or family willing to show him the kind of affection that Kel tends to.

I mean yeah, Kel’s physically attractive. Like… super hot. But that’s not what makes him appealing. You see, many merfolk have some level of ability to see beneath the surface of people. Not to read their minds as Aren does, but to see into what lies beneath the teeming, confusing, contradictory swirl of thoughts. He may not know what you’re worried about, but he’ll see the depth of your concerns. You may have built up layers of emotional armour, but Kel might see the fear beneath that, and see that it’s an act that you’ve been putting on for so long that you believe it, yourself.

Not all of the merfolk are as perceptive as Kel, and even those who are don’t always care what they see. Some believe that a person’s actions are what matter, not what lies beneath. Maybe they’re right. Seeking out the bright spots in a person’s soul is a dark and sometimes dangerous journey, and not one that even Kel chooses to undertake with many people.

But once in a while, he finds someone he connects with on that deep level, as though they were destined to meet. Sometimes he meets two of them in the same family, though with slightly different outcomes. And when Kel finds that connection, his loyalty goes beyond anything most of us have ever had the pleasure of experiencing.

He might not be the flashy hero, bold and brave, rushing into battle–at least, not when we’ve seen him. But Kel has saved lives.

And he will affect the course of Tyrean history.

Fun Fact: Kel’s name was originally Kai, which means “ocean.” I changed it when I realized how many YA/NA books coming out right now have characters with that name. I think this one suits him a lot better, and I apologize to him for getting it wrong.

Tell me: What character have you fallen in love with for reasons other than a hot body and a cocky smile?

Kate Sparkes was born in Hamilton, Ontario, but now resides in Newfoundland, where she tries not to talk too much about the dragons she sees in the fog. She lives with six cats, two dogs, and just the right amount of humans. USA Today bestselling author of the Bound Trilogy (mature YA Fantasy), Into Elurien, and Vines and Vices. Writing dark, decadent, and deadly Urban Fantasy as Tanith Frost. www.katesparkes.com www.tanithfrost.com END_OF_DOCUMENT_TOKEN_TO_BE_REPLACED
This entry was posted on Thursday, July 16th, 2015 at 10:15 am and tagged with bound trilogy, kel, mer, mermaid, merman and posted in Bound A-Z. You can follow any responses to this entry through the RSS 2.0 feed.
« Bound A-Z: J is for “Jumpin’ Jehosephat”
L is for Luid »