Yes, the day has FINALLY arrived! I’ve had this cover (created, like the first two, by the incredibly talented Ravven) since early this past summer, but wanted to save the big reveal for a time closer to the release date.

And we now have a release date. *whee, party!*

And so much exciting stuff going on, including a SALE! Yep, to celebrate this cover reveal day, the Bound ebook is on sale for 99 cents on Amazon, Nook, Kobo, and iBooks! I don’t do this often, so if you know someone who’s been waiting for a sale to grab the book and start the series, today would be a great day to let them know about this little treat. 🙂

But enough about that.

We’re here about a new book. An exciting book. A massive, twisting, thrilling, heart-pounding conclusion that some of you have been waiting rather impatiently for.

Not every fairy tale ends with “happily ever after.”

The plan was simple: Find Ulric, the lost king of Tyrea, then return him to Luid to reclaim his throne from the tyrant who stole it. But though Aren, Rowan, and Nox accomplished the first part of their task, the rest is proving to be more complicated than any of them imagined.

Severn won’t give up his throne without a fight. Worse, it seems Ulric did not fare as well during his years in captivity as he’s led everyone to believe—and Rowan may not have escaped unscathed, either.

If Nox doesn’t find a cure for the king’s mysterious ailment, Aren will be forced to challenge Severn for the crown. It’s a battle Aren has little hope of winning. And if he does, it will cost him the love and the freedom he’s fought so hard to gain. 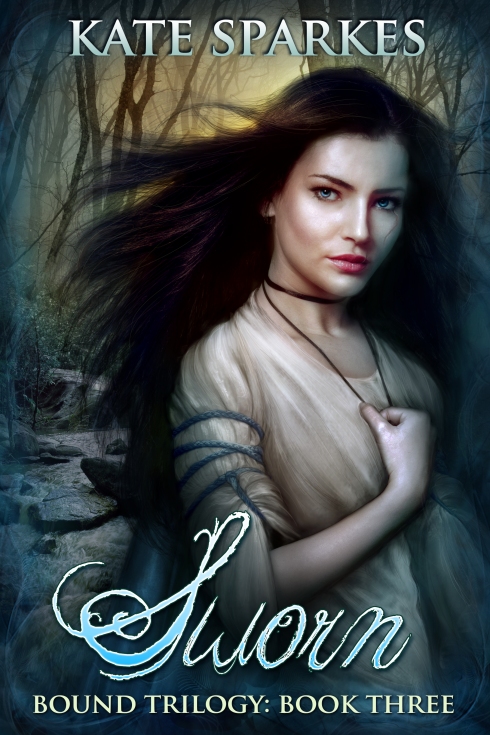 Kate Sparkes was born in Hamilton, Ontario, but now resides in Newfoundland, where she tries not to talk too much about the dragons she sees in the fog. She lives with six cats, two dogs, and just the right amount of humans. USA Today bestselling author of the Bound Trilogy (mature YA Fantasy), Into Elurien, and Vines and Vices. Writing dark, decadent, and deadly Urban Fantasy as Tanith Frost. www.katesparkes.com www.tanithfrost.com END_OF_DOCUMENT_TOKEN_TO_BE_REPLACED
This entry was posted on Friday, December 4th, 2015 at 9:00 am and tagged with book, book three, Bound, cover reveal, fantasy, indie, indie publishing, sale, Sworn, YA and posted in Bound Trilogy Book 3, cover reveal, Sworn. You can follow any responses to this entry through the RSS 2.0 feed.
« Blightlore Release Party Today! With giveaways… you know you wanna…
To Pre-Order, or Not to Pre-Order? That’s Quite the Question… »