Are you guys ready for this?

Newsletter subscribers met Zinian on the same day this blog hosted Into Elurien’s cover reveal (the benefits of subscription are real). Now it’s time to unleash him in public.

I hope he behaves himself. He’s a lovely guy, but he’s… well, he’s a bit of a monster.

I’ll just grab a bit of chapter three and leave it here for you. Enjoy.

(If you’re the type who needs context, our main character has found herself quite suddenly surrounded by violent monsters, about to be executed. A moment ago she was in a hotel attic in Newfoundland, Canada. These things do happen, or so I’m told…)

A lower voice, more human. I only shook harder. With my head down, I couldn’t see anything but the crowd of feet in front of me parting. I closed my eyes. Something cold touched my chin. Metallic. A blade. I pictured the cat’s great, curved sword, and felt like vomiting as it lifted my chin.

“Look at me,” the human voice ordered.

I forced my eyes open and was confronted by the strangest feet I’d ever seen. Human…ish. Longer toes than normal, with curved claws instead of toenails, and skin covered in tough blue scales to the knees. I didn’t want to look higher, but the sword beneath my chin insisted. My gaze continued up the legs, which were covered by ragged pants from the knees up. Above that, hard abs and a chest that would have looked comfortingly human if not for the faint blue patina that shaded parts of the bronze skin, or the extra set of muscles under the otherwise highly acceptable pectorals. Spots of blood had dried on his skin. The fingers of the smooth hand that gripped the straight-bladed sword ended in sharp black claws. I let myself look up to the creature’s broad shoulders, where massive, bat-like black wings arched high behind him. Dark scales dotted their bony parts in patches.

“Look at my eyes,” he ordered, “or die now.” The blade tilted sideways, a reminder of how easily he could follow through on the threat.

I swallowed hard, and the tip of the blade pricked again at my throat. Another deep breath, and I looked up.

I met his eyes, and they were enough to keep me from noticing anything else for several moments. Bright green, and blessedly normal. Not snake eyes, not feline slits for pupils. The thick black eyebrows that topped them furrowed, but seemed more intensely observant than angry.

His mouth twisted into a snarl, revealing long, white canine teeth. He turned toward the cat person, and I noted the deep scars that marred his right cheek. “It’s not her.”

When he returned his attention to me, his roughly cut black hair fell over his face. At least, the parts of it that weren’t held behind the thick horns that spiralled back like bony corkscrews from his hairline.

Devil. That name came to me as easily as centaur had, but seemed not entirely right. As he glared down at me, I thought that it might be close enough.

Wondering how our MC got there? Curious to see more? I’ll be revealing chapters one AND two next Friday. Or you can just go ahead and pre-order this one in ebook (links here). Into Elurien releases June 15, and at just-over-novella length it’s a gorgeous, fast-paced, magic-and-romance-filled, chill out with some monsters beach read. Or cottage read. Or relaxing at home read. Whichever. 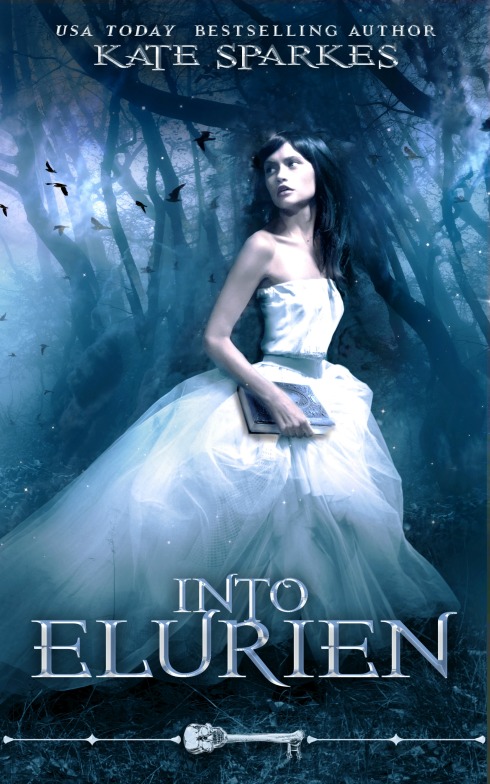 Don’t forget to check out the rest of the series here!

Kate Sparkes was born in Hamilton, Ontario, but now resides in Newfoundland, where she tries not to talk too much about the dragons she sees in the fog. She lives with six cats, two dogs, and just the right amount of humans. USA Today bestselling author of the Bound Trilogy (mature YA Fantasy), Into Elurien, and Vines and Vices. Writing dark, decadent, and deadly Urban Fantasy as Tanith Frost. www.katesparkes.com www.tanithfrost.com END_OF_DOCUMENT_TOKEN_TO_BE_REPLACED
This entry was posted on Thursday, June 2nd, 2016 at 3:35 pm and posted in Uncategorized. You can follow any responses to this entry through the RSS 2.0 feed.
« Book Review (video): The Productivity Project
Into Elurien Chapter Reveal–and a small note »