I want everything I do to be perfect on the first try. Right away. Because something deep inside me thinks that if I’m not magically gifted at something, I shouldn’t try.

Now, I am also fully aware that this is BS, and I’m fighting it. It’s a stubborn mindset, though.

But I’m trying to change the way I look at risks, messes, and mistakes. Because sometimes? Sometimes you have to make a huge mess before you can create something beautiful, and you have to take a risk to get a reward.

I’m thinking about this today because I got my hair done. Well… half-done. It was getting dull after over a year of purple dye, and I wanted a fresh start from root to tip so I could get back to something brighter.

But do you know what happens when you bleach hair that’s been purple for 17 months? 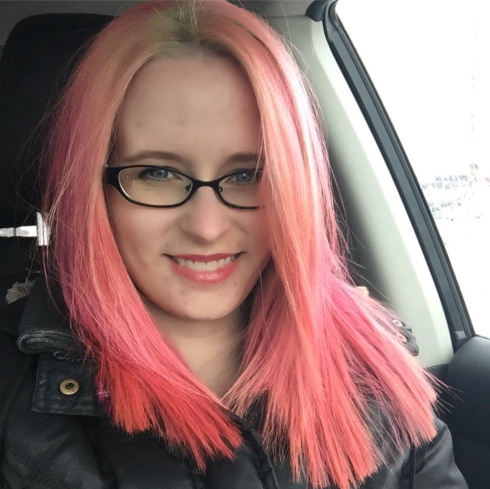 I mean, I think it’s kind of fun, but it’s not the end result I’m going for. The point is, this little OMG this is not what I want what have I done mess is a step toward what I do want. A necessary step.

I couldn’t get what I want if I didn’t move through the mess.

(And honestly, I’m now considering going berry pink for a while before I return to the Land of Purple. Sometimes messes aren’t so bad.)

Hair is a tiny thing, but it reminds me of a whole lot of bigger stuff.

First drafts can be like this, too. I can plan everything and still make a mess of it when my fingers hit the keyboard. That happened to me not too long ago, when I got to the mid-point of a book I was SUPER excited to write and realized it just wasn’t working.

I could have called it a failure and walked away. But my mess showed me what, exactly, wasn’t working. And when I had a consultation call with my wonderful editor last night, I was able to talk through those problems. Now I can’t wait to get back to it and start over (though I do have some other stuff going on with that whole urban fantasy pen name thing…)

I’m working through a few medical issues right now that are kind of hit-or-miss with medications. We try stuff, maybe it works, maybe I feel like crap for a month while we wait to see whether I’ll adjust to it, maybe we try something else.

While this is going on, my productivity is lower than it would normally be. It sucks. I panic and want to stop trying. I get sick of feeling sick. I want to give up. But I’m taking a chance, hoping that getting through this mess will mean things will be so much brighter on the other side that it will be worth slogging through the side-effect circus.

And whether it’s did you mean to do that?! pink hair, stress-inducing dead ends on projects, or just trying to get my *stuff* together in life, I’m trying to be okay with the mess. Not every step of every journey needs to be pretty or perfect, as long as I’m learning and growing and not stressing too much in the meantime.

At least, that’s what I’m trying to teach myself. 🙂

Kate Sparkes was born in Hamilton, Ontario, but now resides in Newfoundland, where she tries not to talk too much about the dragons she sees in the fog. She lives with six cats, two dogs, and just the right amount of humans. USA Today bestselling author of the Bound Trilogy (mature YA Fantasy), Into Elurien, and Vines and Vices. Writing dark, decadent, and deadly Urban Fantasy as Tanith Frost. www.katesparkes.com www.tanithfrost.com END_OF_DOCUMENT_TOKEN_TO_BE_REPLACED
This entry was posted on Thursday, March 30th, 2017 at 7:56 pm and posted in about me, Best Of. You can follow any responses to this entry through the RSS 2.0 feed.
« “I’m real” and other lies we tell ourselves
Mondays »