First thing: Remember the garden? Yeah, apparently the frost date in Newfoundland is JUNE 8. Holy frig. I mean, I love this place. It has incredibly beautiful, rugged landscapes; the people are often friendly and have wicked accents, and I sometimes see moose and bears when I’m driving. Oh, and I live a “yeah, we can go for the weekend” distance from my favourite city. But really? I’m reading blogs where people are talking about the blossoms on their zucchini plants, and I’m like “yeah? Well, mine are dead. DEAD.” I live in the land that summer forgot.

The bean plants are hanging in there, though they’re not growing. The sunflowers are fine, the sweet peas are coming up, the cauliflower plants we bought are OK, though I doubt they’re happy. The wild strawberry plants are doing great, the store-bought ones lost their flowers… I’m just going to pick them from the forest.

I’m not complaining that stuff died when we planted too early. I’m aware of the reality of the place we live, I knew the risks, and the whole thing is really just something fun to do with the kids (who seriously won’t even eat vegetables they grew themselves). It’s just a good thing I’m not taking my little analogy too seriously, because I would have to give up writing right now, because OH THE FUTILITY EVERYTHING SUCKS.* 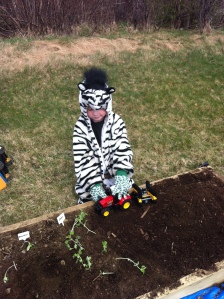 In other news (and with apologies to anyone who might have already seen this on Facebook, though I know that there’s very little crossover here), this conversation happened in my kitchen last night. Simon is almost eight years old (holy CRAP) and Ike is 5. Oh, and Ike was wearing his giant fuzzy zebra costume, because that’s just how Ike rolls.

Me: So you think you might want to go to camp?
Simon: How long would it be?
Me: Looks like it would be–
Ike: I want to go on a train!
Me: Yes, later. Four nights.
Simon: I’d miss you.
Ike: Where’s the train?
Me: There IS no train.
Simon: *looks at pamphlet* How old do kids have to be? When is it?
Ike: I’ll go!
Me: You’re too young, baby.
Ike: *slams head into table* I’M TOO YOUNG TO GO ON THE TRAIN?!
Me: No! You can go on the train when we go to Ontario. That’s not what we’re talking about. We’re talking about Simon and camp.
Ike: YAY!!!
Simon: Sounds like fun. I want to go. But I don’t want to go in a canoe, because the Titanic made me scared of boats.
Ike: But not TRAINS!

In conclusion, that’s why I didn’t get much writing done yesterday. My brain was exploded from my childrens.

*No, everything does not suck, I’m being dramatic, everything is fine. Just so’s you don’t worry. 🙂

Kate Sparkes was born in Hamilton, Ontario, but now resides in Newfoundland, where she tries not to talk too much about the dragons she sees in the fog. She lives with six cats, two dogs, and just the right amount of humans. USA Today bestselling author of the Bound Trilogy (mature YA Fantasy), Into Elurien, and Vines and Vices. Writing dark, decadent, and deadly Urban Fantasy as Tanith Frost. www.katesparkes.com www.tanithfrost.com END_OF_DOCUMENT_TOKEN_TO_BE_REPLACED
This entry was posted on Tuesday, June 4th, 2013 at 9:44 am and posted in Family, Funnies. You can follow any responses to this entry through the RSS 2.0 feed.
« Advice to Aspiring Writers
WIPpet Wednesday: First Five (and tiny ROW80 update) »