Since it’s the fifth, and since this is the first Wednesday of JuNoWriMo, here’s the first 5 lines of this month’s work in progress, Torn. This is a few months after the end of Bound, and Aren gets to start this one off.

“No, you’re not. You’re thinking about it too much. If you want it too badly, you’re never going to get there. Don’t try to do it, just let it happen. You’ve almost got it.”

She shot me a look that told me to shut up before I said something she’d make me regret, then closed her eyes again.

Yep, starting with dialogue. Because I’m a rebel like that.

Want to join in the fun? Every Wednesday the WIPpeteers post a selection from a work-in-progress that relates in some way to the day’s date (today could have been something from chapter 5, page 56 [for the fifth of June], yadda yadda). To see what everyone else is offering today, head on over to our host blog, My Random Muse (and check out a fun new option today!), and click on the linkie in the side bar. Feel like contributing? Come on in! After all… 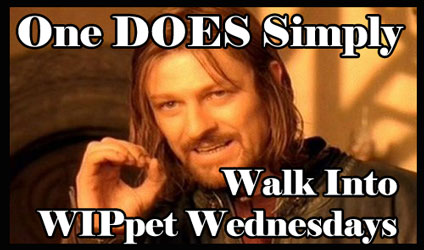 Now, as for my ROW80 update: JuNoWriMo is in full swing, and I’m doing… OK. It’s going. I’ve been having trouble squeezing writing time in, though. Also, yesterday I had the stupid. No, I didn’t DO something stupid, I had a bad case of it. My brain got borked, yo. The weather changed overnight in a big way, but instead of a headache, Mother Nature gifted me with a thick mental fog that made me feel like Back Seat Guy in the opening scene of Super Troopers, except less paranoid. Everything anyone said to me sounded like “Littering and? Littering and?”

So no writing for me. O.o

But I’ll get there. The story is coming along, I’m almost on track for words. The reading goals aren’t happening so much as I might like, but you know how that goes.

Happy Wednesday, everyone! I gotta go put out the garbage.

Kate Sparkes was born in Hamilton, Ontario, but now resides in Newfoundland, where she tries not to talk too much about the dragons she sees in the fog. She lives with six cats, two dogs, and just the right amount of humans. USA Today bestselling author of the Bound Trilogy (mature YA Fantasy), Into Elurien, and Vines and Vices. Writing dark, decadent, and deadly Urban Fantasy as Tanith Frost. www.katesparkes.com www.tanithfrost.com END_OF_DOCUMENT_TOKEN_TO_BE_REPLACED
This entry was posted on Wednesday, June 5th, 2013 at 7:47 am and tagged with Aren, fantasy, fight, magic, Rowan, WIP, writing and posted in ROW80, Torn, WIPpet Wednesday. You can follow any responses to this entry through the RSS 2.0 feed.
« Two Things
Older Engrish »