(OK, so the picture showing up in the WordPress reader preview? Not Cape Spear. Not at all. Anyone know how whether we can change settings on that?)

Good Monday, my dear peoples! I hope you all had a great weekend, whatever that means for you.

Our weekend was quite fantastic. We headed to St. John’s as soon as school was done on Friday. There wasn’t time to get to all of my favourite spots. there never is; there are just too many of them. But the little guy and I got up to Signal Hill while AJ took Simon to see Man of Steel:

View from the lower parking lot. Yep, we climbed up there.

So that was fun. Then on Sunday, instead of leaving in the morning like we usually do, we decided to go up to Cape Spear. It’s probably my favourite place in the world. Why? Well, on a day like yesterday, you’ve got the fact that it’s the easternmost point in North America; not quite yelling distance to Europe, but as close as you’re going to get without a boat. The landscape is pure Newfoundland, rocky and rugged and covered with boulders left by glaciers, more kinds of beautiful little plants than you’d ever expect, and long grasses blowing in the constant breeze off of the ocean. Plenty of trails for walking, boardwalks over the mucky areas, and lots of room to spread out even on a ridiculously busy day like yesterday. Like, crazy busy: both parking lots full, cars parked on both sides of the winding road leading up to them. 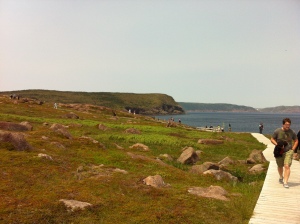 Dat landscape! (this is looking back toward the city; Signal hill is in the background there) 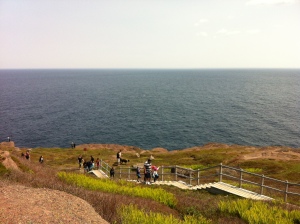 Then there are the lighthouses. We didn’t get all the way up to the old one on this trip, but they’ve got the inside set up as a museum showing what life was like for the lighthouse keepers way back when. At least, I think so… we haven’t paid the admission to go in yet. It’s beautiful, restored to the way it looked back in 1839. Great pictures here, and lots of information, too.

But there’s also the newer lighthouse up there, fully functional and doing its job.

…and apparently about to get smashed by my giant husband. O.o

You’ve also got military history up there: WWII cannons (sorry, 10-inch guns) and bunkers. Not the most cheerful place to have spent time back then, I imagine, and really creepy now, but interesting. Also, for the more mature among us, you can catch people standing near the guns and…

So yes, it was a lovely day, but why so busy? Well, we were there to see the whales, but it turned out there were other things going on that we didn’t now about. Oh, Cape Spear, you so crafty! Touch tables from the Ocean Sciences centre where the kids could interact with crabs, sea cucumbers, snails, and other local creatures, a colouring table, and a minke whale skeleton courtesy of a group that does whale/sea turtle/basking shark rescues, also available for touching and close examination. So interesting!

As for the whales? Well…

Humpbacks, and quite a few of them, some very close to the shore. It was AMAZING. I wish I could have got better pictures for you all, but I don’t have a camera that’s better than the one in my phone, and it’s a very, VERY bad idea to get too close to the water at Cape Spear. Even on calm days rogue waves can come up, and not a year goes by when at least one tourist doesn’t get swept away after he/she ignores the dozen “dangerous coastline, stay on designated trails” signs.

This doesn’t stop … um… well, people who think the signs aren’t for them from taking their little kids down to get closer to the whales… and the dangerous ocean. I love you guys, but not that much.

But I did get this for you.

See the light blue patch between the dorsal fin and the rocks? That’s one massive, white flipper right there. One was swimming away and we could see both stretched out to the sides… just amazing.

When they exhale, they make a very loud “PFFFT” sound. AJ thinks they were just making fun of all of the crazy humans watching them from the shore.

One more thing before we leave the whales: When they go back under, the water pooling behind them leaves a flat space in the waves. This is called a whale footprint. Yes, I got pictures of the Prints of Whales. 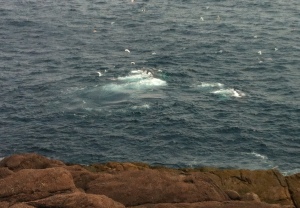 You didn’t think you were getting out of this without at least one stupid pun, did you?

So that was our trip to Cape Spear. If you’re ever in St. John’s and have a way to get out there, I highly recommend visiting. Even if the weather’s not perfect and the whales aren’t around, it’s an amazing place. Have I ever showed you all my pictures from the foggy evening we spent up there last summer? It was creepy and surreal and quiet and kind of mind-blowing. We went past the old lighthouse:

Tell me this doesn’t look haunted.

…and out onto the lands beyond. Very eerie in the fog! When I stepped close to the edge of the cliffs, it was like the end of the world opening up under my feet.

I got the most delightful shivers!

The ocean was down there somewhere. I know, because I could hear it whispering. 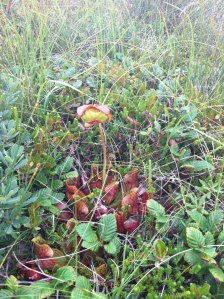 Pitcher plant. Yep, our provincial flower is carnivorous. How fun and creepy is that?

Remember when I said the glaciers dropped boulders all over the place? Sometimes they did stuff like this. I sat under there. It was cozy.

So there you go. That’s Cape Spear, and I love it. Highly recommended if you’re out that way, with or without the whales. 🙂

Kate Sparkes was born in Hamilton, Ontario, but now resides in Newfoundland, where she tries not to talk too much about the dragons she sees in the fog. She lives with six cats, two dogs, and just the right amount of humans. USA Today bestselling author of the Bound Trilogy (mature YA Fantasy), Into Elurien, and Vines and Vices. Writing dark, decadent, and deadly Urban Fantasy as Tanith Frost. www.katesparkes.com www.tanithfrost.com END_OF_DOCUMENT_TOKEN_TO_BE_REPLACED
This entry was posted on Monday, June 24th, 2013 at 10:20 am and tagged with cape spear, humpback, Newfoundland, signal hill, St. John's, whale and posted in Nature, Newfoundland. You can follow any responses to this entry through the RSS 2.0 feed.
« Breath of Fresh Air
Book Review: Matched »