I was going to do a nice post for you today about that Barkery I mentioned before. Then I plugged my camera into the computer and remembered why I don’t use the camera anymore: it says that the files are “read only” and can’t be copied onto the computer.

So until I figure that out, why not take a trip to Bayfront Park instead?

Many of our days in Hamilton were a series of short events. In one way, it was great; we got to see and do lots of things. On the other hand, it’s really hard to get your kids to leave a fun place when saying “we’ll come back another day!” is simply not an option. This was one of those days. We had plans for the evening of AJ’s birthday that involved a whole crapload of extended-family time, and we were pretty excited about that, but what to do with the earlier bits of the day?

How about a fantastic playground?

That, my friends, is a good playground. 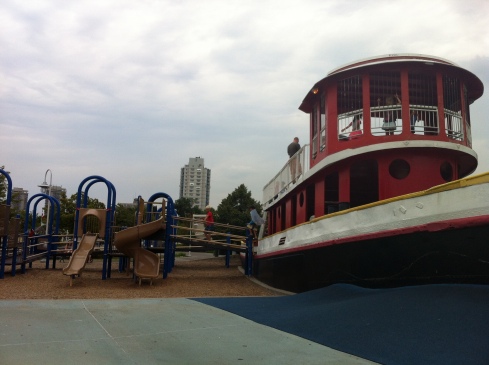 SO MUCH PLAYGROUND. And that’s not even the best side; the other (Port?) side has more climbing equipment, including a bouncy bridge thing that’s way too much fun to be allowed at a modern playground, and another gangplank leading on to the ship.

The boat is two levels of… well, there’s nothing ON the boat, but come on. PLAY BOAT.

Bayfront has more than just a playground (and a tiny beach, did I mention the tiny beach?). They also have walking trails, which we didn’t have time to explore, and lots of real boats to watch. We had lunch at William’s, and it was delicious.

Bonus Story: At lunch, I became THAT GUY.

You know the one. The one who eats most of his meal at a restaurant and then complains… yeah, I became him. It wasn’t my fault! I ate half of my turkey and swiss sandwich before I realized it was distinctly lacking in swiss. Not that it wasn’t a good sandwich, mind you, but it’s right there in the name… anyway, I wasn’t going to say anything, but AJ offered to go and ask for my cheese.

He came back with a whole new sandwich.

William’s, I was not scamming you. I just wanted my cheese.

Kate Sparkes was born in Hamilton, Ontario, but now resides in Newfoundland, where she tries not to talk too much about the dragons she sees in the fog. She lives with a Mountie, two kids who take turns playing Jeckyll and Hyde, two cats, and one chihuahua. USA Today bestselling author of the Bound Trilogy (mature YA Fantasy) and Into Elurien, writing dark, decadent, and deadly Urban Fantasy as Tanith Frost. www.katesparkes.com www.tanithfrost.com END_OF_DOCUMENT_TOKEN_TO_BE_REPLACED
This entry was posted on Wednesday, August 7th, 2013 at 9:09 am and tagged with Bayfront Park, Hamilton, Ontario, William's and posted in Travel. You can follow any responses to this entry through the RSS 2.0 feed.
« Speaking of Self-Promotion…
What Have We Learned Today, Children? »

11 responses to “Fun at Bayfront”