I’m lying in bed as I type this. Not by choice; my lower back still feels like it’s trying to peel itself away from the rest of my body and escape. Still, it’s nice to have the option. It’s 2:38 on Saturday afternoon, the kids haven’t killed each other while I’ve been in here, my parents are safely at their new home in THIS VERY PROVINCE (holycrapwow)… So I’m not complaining about anything.

A Round of Words demands an update, does it?

I’m moving slowly toward my editing goals. Chapters one and two have shaped up nicely– nicely enough to be sent away and ripped apart, anyway. I’ve eliminated most of the semicolons from the manuscript, which a few of you know is a insane accomplishment. My addiction is ridiculous. Like, multiple semicolons in a single paragraph ridiculous, because they’re invisible to me when I’m reading things over. There are now exactly three in the entire book.

PROGRESS! *self-high-five, which is really just clapping, but whatever*

I’ve also got scenes outlined on lovely index cards, and have decided that a few of them could be combined with other scenes, which (maybe, possibly, I hope) might cut a few thousand words and make one character stronger. I’ve finally nailed down one main character’s motivation for doing a Very Big Thing, and the other’s situation at the beginning of the story.

Pro tip: Make sure you get these things straight before you start the first draft. Or the second. *headdesk* This is what I get for allowing the guy who was supposed to be a love interest to tell his side of the story. 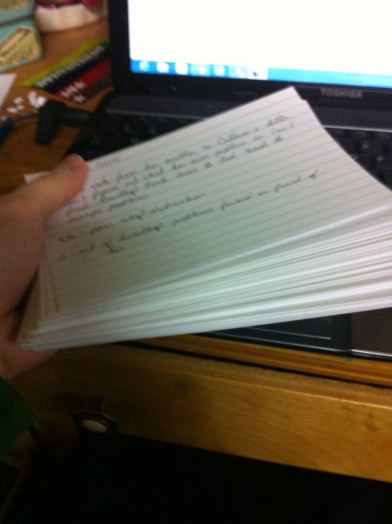 In related-but-not-goal-specific news, my earliest reader for Bound is now looking at my draft of the sequel. This is a huge step for me– I never show anyone work that’s not polished. I think this will be better, though, because I already know there are issues. My wonderful friend has been asking for this for over a year and a half, now. It’s time.

I’ve started reading that ARC that I mentioned, and I’m already floored by the amazingness. So far it rates a “let the bathwater get cold” on the “Couldn’t Put It Down” scale, which isn’t too shabby. I’m always a little nervous about promising a review (as I’m always honest, but hate to hurt anyone’s feelings), but I don’t think I need to worry about stepping on any toes with this one.

I finished reading Coraline to the boys last night, and they’re already asking when we can read it again. I suggested maybe reading another book together, instead. They’re considering it.

Haven’t read any non-fiction this week.

I’m getting better (though by no means perfect) about putting the phone down when the kids are around. I crave distraction, so this is difficult for me. This probably indicates deep and horrible issues, but for now, I’ll just deal with that symptom.

Made to-do lists every night. Partial credit for follow-through.

Meal planning… THAT’S what I was supposed to be doing right now! I knew there was something. Better get on that. See below for my cry for help…

So that’s it. I think I’m doing well so far. I’m going to have four hours to kill on Monday when I take the car in for repairs and have to wait around for a dentist appointment, so here’s hoping I get a crazy amount of editing done then, or at least get through one of the two upcoming tough bits. I’ll be reporting back on Wednesday, and if I stay on track I’ll let myself participate in WIPpet Wednesday this week.

Gold stars all around!

Questions for you: Any ideas for cheap, simple meals that don’t require that the cook stand for long periods of time? What do you think I should read next with the kids? And writers, at what stage do you feel comfortable letting people see your work?

Kate Sparkes was born in Hamilton, Ontario, but now resides in Newfoundland, where she tries not to talk too much about the dragons she sees in the fog. She lives with six cats, two dogs, and just the right amount of humans. USA Today bestselling author of the Bound Trilogy (mature YA Fantasy), Into Elurien, and Vines and Vices. Writing dark, decadent, and deadly Urban Fantasy as Tanith Frost. www.katesparkes.com www.tanithfrost.com END_OF_DOCUMENT_TOKEN_TO_BE_REPLACED
This entry was posted on Sunday, January 12th, 2014 at 4:30 pm and posted in Revision, ROW80. You can follow any responses to this entry through the RSS 2.0 feed.
« Engrish* and Rip-offs and Copyright Infringement, Oh My!
From the “Boy Aisle” at Rossy… »