Bound A-Z: D is for Dragons 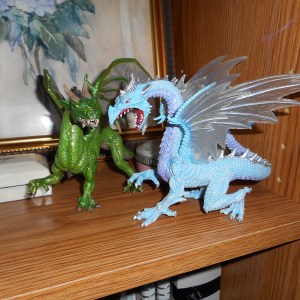 We’re going to do something a little different today.

Instead of me telling you about dragons (most of which you’ll have learned on your own in the books, or will learn), I’m going to dig up something from a deleted scene from Bound.

In early drafts, Aren explained far more about dragons to Rowan than he did in the version you all have seen. It was more interesting if she walked in mostly unprepared, and in later drafts Aren got more reserved, and so handing out fun facts and stories willy-nilly really would have been out of character for him.

I hated to cut this part, though. One of the things I like about the world of these books is the folklore and the mythology. Most of it only gets mentioned in passing: the Tyrean children’s stories that Rowan doesn’t read to us, the ballad sung by a Wanderer girl, the many gods of Tyrea, the legends of the Dragonfreed Brothers.

This was a story told in full…and unfortunately, the larger story was better off without it.

From an old draft of Bound, here’s what the original conversation looked like, complete with a little bonus Tyrean history for you. Enjoy, and please forgive the lack of editing. It was a work in progress…

“This might be a silly question, but is the treasure cursed?” she asked. She was looking at me so intently that she almost got knocked off of her horse by a low-hanging branch, which she ducked under at the last moment.

“It’s not silly.” Her ignorance was infuriating, but it wasn’t her fault. Better that she know the dangers of the land we’d soon reach. “A dragon doesn’t intentionally do anything to its possessions, as far as we know. Something gets into them, though. There are stories about people who possess something as small as a gold coin from a dragon’s hoard going insane, killing strangers or loved ones out of rage or envy. There was a king hundreds of years ago who took possession of a dragon’s gold after it died; it’s said he was a great king before that. He was generous in sharing the treasure with his household and his friends, even his servants. According to the stories, barely a month later the idea of ruling the kingdom had been thrown out in favour of decadent feasts, drunkenness, experimenting with potions and exotic entertainments. That was only the beginning. Soon they wanted more and stranger diversions, and they became cruel, reaching levels of depravity a nice person like you wouldn’t be able to comprehend, I’m sure. They lost all respect for life, lost whatever inhibitions they once had. You probably don’t want to hear those stories.”

She looked like I’d insulted her, but said, “I suppose not. And the court fell?”

“More than that. They had to pay for all of this somehow, and the gold made it into the hands of nearly everyone in the city. It was complete chaos. People outside eventually realized what was happening. They burned the city to the ground, and everyone in it. The next king rebuilt far to the south, in Luid, and no one has resettled the old place since.”

That bought me another few minutes of silence. “Does it affect everyone the same way?” she asked at last.

“I mean, does one dragon’s treasure make everyone who possesses it murderous, and another’s make people…” She paused. “Gluttonous?”

That’s not what you were going to say, I thought, but let her continue.

“Or does it depend on the person? Last question for now, I promise.”

Thank the gods. “People used to think it was the former, that a dragon’s particular influence would cause everyone to act like that dragon. We think now that it’s more a case of it bringing out whatever darkness is already in a person so that it drowns out everything else that a person was. We don’t test that theory, though. There was one scholar who thought that if a person who was completely without vice were to take the treasure, the magic wouldn’t affect him or her. Then they could melt it down and make it safe for others.”

“And then they realized that there’s no such person.”

TELL ME: If you stole a dragon’s treasure, what would it bring out in you? Lust? Envy? A willingness to literally kill for the last Oreo in the box?

Kate Sparkes was born in Hamilton, Ontario, but now resides in Newfoundland, where she tries not to talk too much about the dragons she sees in the fog. She lives with six cats, two dogs, and just the right amount of humans. USA Today bestselling author of the Bound Trilogy (mature YA Fantasy), Into Elurien, and Vines and Vices. Writing dark, decadent, and deadly Urban Fantasy as Tanith Frost. www.katesparkes.com www.tanithfrost.com END_OF_DOCUMENT_TOKEN_TO_BE_REPLACED
This entry was posted on Thursday, May 28th, 2015 at 10:09 am and tagged with bound trilogy, dragons, legend, treasure and posted in Bound A-Z. You can follow any responses to this entry through the RSS 2.0 feed.
« WIPpet Wednesday: Crime Scene
Spotlight on A Season for Killing Blondes »

5 responses to “Bound A-Z: D is for Dragons”