(SHORT POST! I have so much reading to do this weekend. Not that I’m complaining, mind you.)

Several people suggested that I should try making a coconut oil and sugar body scrub.

And I am DELICIOUS. 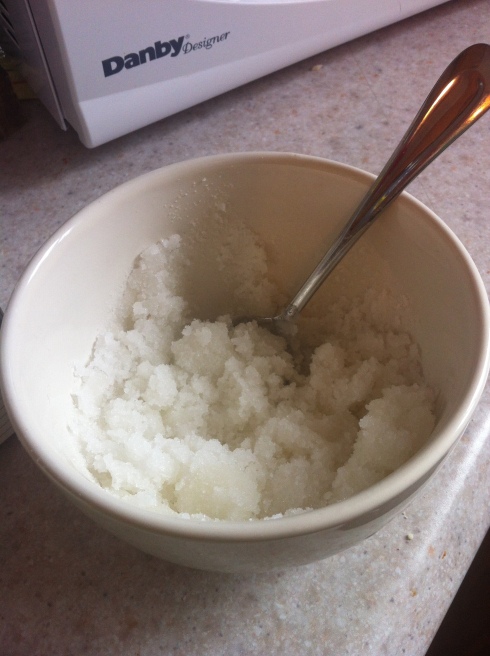 I didn’t get all fancy with essential oils to make it stink real purdy. Just white sugar and coconut oil. Mix. Take to shower. Scrub. Rinse.

It’s all pretty simple, really. And my skin felt soft and slippery after. Also made my bathtub slippery, so you’ll want to watch that.

Works well on lips as a pre-bedtime lip scrub, too. Takes make-up off along with dead skin. And of course, tastes LIKE SUGAR AND COCONUT OIL. So there’s that.

As for the cost… I don’t know what prices are like where you all live, but around here, sugar is cheaper than dirt, but coconut oil is pretty darned pricey. I cringe a little every time I use it for anything other than eating. Still, you don’t need a lot of it for this, and it is a nice treat.

O is for Oil Pulling

(NOTE: I drafted this post a while ago. Update at the bottom.)

So, oil pulling. This was a new thing to me when my friend Shannon (hi!) posted this article on Facebook. It sounded ridiculous and disgusting, so obviously I had to try it.

The theory is that swishing natural oils around in your mouth for EXACTLY 20 minutes helps detox the mouth, improve oral health, and supposedly provides a host of other benefits, including improving TMJ symptoms.

Hey, I have that!

Coconut oil has antibacterial/antifungal properties (so they say), and plaque is supposed to stick to the oil. In the interest of giving things a shot if they’re not going to hurt anyone… yeah, we’ll try it.

So let’s see… one tablespoon.

Screw that. I gag on my toothbrush. There’s no WAY this is going to end well. We’ll start with a teaspoon of pure virgin CO.

Note to self: melt the oil in the microwave next time, even if commenters on the article are like, “I GUESS you can melt it first if you’re a WUSS.”
Ugh.

Okay, so that melted pretty quickly. Now, swish around for twenty minutes.

Oh. Saliva. How nice of you to show up.

Well, that was interesting.

Yes, I lasted five minutes before I started gagging and had to spit it out into the trash can. How was that? Here’s a quote from another article for you:

“The oil will get thicker and milky as it mixed with saliva during this time and it should be creamy-white when spit out.”

So… yeah. I’m going to be mature about this and just walk away from that one.

As for the results: Hmm. Well, it got gunk out from between my teeth as well as flossing does. My teeth feel slippery… I guess that’s a good thing? No immediate whitening benefit, but at this point I doubt anything can help me with that.

Annnnd my tongue was so slippery that it just fell out of my mouth and crawled away. It’s hiding under the stove, quivering.

Could I do this first thing in the morning? I don’t know. I guess I’ll give it a shot if it might help with the TMJ. Maybe it’s one of those things you get used to, like using a neti pot (also eew, but it does clear the sinuses).

Still, I’m looking forward to moving on to making a body scrub out of CO and sugar. That sounds like a LOT more fun!

UPDATE: After a few days of trying this, my time-to-violent-gagging went from five minutes to an impressive ONE MINUTE. This might not be for me.

Yes, I just used Doge for my title. Stop judging me.

So, coconut oil. It’s just everywhere these days, isn’t it? I know I can’t scroll through my Facebook feed or scan Pinterest* without seeing an article or a list touting the benefits of this stuff. As far as I can tell, it ranks somewhere below unicorn blood and above the fountain of youth in terms of its restorative properties.

Or that’s the claim, anyway.

As for me, I tend to take any news about “miracle foods” with a mighty huge grain of salt… which I’m led to understand is not a SUPER FOOD, but whatever. Still, I have a lot of friends who love this stuff, and it doesn’t look like using it is doing any harm to anyone. I bought some, I cooked with it.

It was FANTASTIC. Never have my yorkshire puddings been crispier, my toutons more tasty, my almond-breaded fried chicken more… well, I’d never tried that before, but it was also amazing.

So I looked into other uses for this gunk, and lo and behold… 101 Uses for Coconut Oil.

A lot of them are repeats. Still, it seems like a good place to start. The thing is, though, that this is no fun if I’m just doing it on my own, and if I don’t get to blow it entirely out of proportion. So here’s the plan: I’m going to go through the “101” uses and report back to y’all. Because why not throw myself in front of a coconut-scented bus for the benefit of all? If these things work, we’ll all know. If not, we’ll expose this ploy by Big Coconut for what it is.

Let’s look at what I’ve tried so far, and I’ll see what I can do for you on the rest of it in later posts.

1. In cooking as a great oil with a high smoke point. Great for baking, stir-frys or as a dairy free replacement to butter.

Well, I guess I’ve done that. Greasing a baking pan, frying, all good. I haven’t tried it as a replacement for butter, except on popcorn (which was DELICIOUS when I used a mix of the two). It’s just… I like butter. A lot. STOP TRYING TO TAKE MY BUTTER, LIST.

3. As a coffee creamer when emulsified into coffee (The only way I’ll drink coffee)

I’ve been putting this stuff in my coffee for several weeks now, which I guess is a form of supplementing. Only a tablespoon per day so far, but I have been feeling more energetic. Like, bouncy at times. Is that necessarily a cause and effect thing? No. But I stopped feeling so darned sluggish around the time I started doing this, and I’m not consuming any more caffeine than I was before. I’m also waking up (naturally) a lot earlier than I used to, and feeling more rested when I do.

Now, if only I could use that energy for good instead of being unproductive in a more energetic fashion…

Oh, but I’m not emulsifying anything. I’m stirring it in and hitting it with my little whisk thing, but not putting it through a blender. That would require EFFORT. And CLEANING. I can handle a little grease skin on top of my coffee. Still tastes good.

I put some on my hands. Well, I tried to. It ended up all the way up my arms, because guys, this stuff SPREADS. And then I kept dropping the dishes I was putting away, because OIL BE SLIPPERY.

Also, I smelled like an explosion at the Hawiian Tropic factory. I’m learning to like the taste of coconut oil, but I’m not crazy about the scent. Maybe I’ll try to find the refined stuff for external use. I’ve heard it’s less likely to make me smell like a bored, wealthy housewife on a piña colada bender.

Skipping to other things I’ve tried, then…

24. Rubbed on lips as a natural chapstick

Greases them up pretty good, doesn’t last long. Also, since they recommend using this stuff as an eye make-up remover, I’m guessing it wouldn’t work over lipstick. I still prefer my eos lip balm, but my lips DO feel super soft after my morning coffee, so there might be something to this if you’re looking for an all-natural lip thingamaboober.

45. As a replacement for vegetable oils in any recipe.

I tried this in cake mix. I know, trying to make a boxed cake mix more healthy is as effective as ordering a diet Coke with your double Big Mac meal, but it was worth a shot. Works great in that and in home-made bread. The only thing you have to watch is the temperature. If you let the melted CO hit cold eggs or a chilly bowl, it goes solid right away. If you don’t want little Coconut Oil Globbies (worst breakfast cereal EVER) in your recipe, keep it warm wile you’re mixing.

46. Better for high-temperature cooking than olive or vegetable oils

Dudes, we covered this in number one. Seriously. Number 78 is the same thing again. Not so much 101 uses, HMMMMM?

Could be. Again, correlation doesn’t necessarily = causation, and I’d have to get off the CO and see if anything changed before I’d be willing to say that I’m sleeping better because of the CO. It’s definitely not hurting, anyway.

I think that’s everything I’ve tried, unless you count repeats (I say that “use as skin lotion” and “use as hand cream after doing dishes” are the same, as is “rub on baby as lotion,” etc).

Full disclosure: I’m not getting pregnant just to try some of these out. I love you guys, but I’m only willing to go so far for blog content.

Coming Soon: Oil Pulling. Because why would I not want to swish coconut oil around in my mouth for 20 minutes? *expletive deleted*

To see what others are up to for the challenge, click here!

*And by “scan,” I mean “drop in for a minute and waste three hours.”