Not an Engrish post, but something I noticed in Rossy.

Um… can someone tell me when Candy Land stopped being a sweet and innocent (if mind-numbingly repetitive) place and turned into a Katy Perry video? 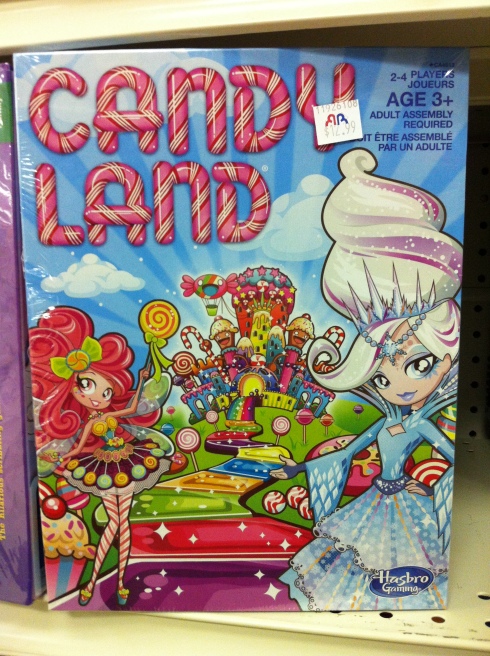 If you have no sense of humor, don’t like having fun, or are very easily offended, you can skip this one. For everyone else, I offer my favourite game.

Eat Poop Now Cat: Easy, fun, insane, and no one loses. Well, you might lose control of your bladder if that’s a thing for you. It happens.

I almost never get to play this one, because it really only works with groups larger than four people. If you have a group like that, though, give this one a shot. I’ve played with my parents, my grandparents, and friends much closer to my own age, and it’s been hysterical every time.

Eat Poop Now Cat is… well, first of all, is probably not the original or proper name for this game, but it’s how I was introduced to it, and it works for me. It’s sort of a combination of Telephone and Pictionary.

Here’s how we do it:

Everyone needs a piece of paper and a pen. That’s it. Each player writes a sentence (ANY sentence) at the top of the page, and you pass to the player on the left. That player draws a picture of that sentence, trying not to take up more than a few inches of vertical space. That player then folds the paper, hiding the original sentence but leaving the picture visible, and passes to the left again. The next player sees the picture, and writes a sentence based on that picture.

Play continues this way, passing in one direction, always folding so that only the previous player’s sentence or drawing is visible, until the papers get back to their original player, or until you run out of room. The only condition is that you ALWAYS end with a sentence written, not on a picture. Then pass one more time.

Then it gets fun. You might have had a few titters, giggles, guffaws or “WTF?” looks before this, but here’s the payoff. One by one, the players unfold their papers and read out loud the original sentence, and then the final one.

The first round, if people are learning the game, might be a bit tame. Give it another round. I have never played this and NOT had things get either ridiculous, nonsensical, surreal, or dirty, depending on who I’m playing with. Always play multiple rounds, and be sure to pass in the opposite direction on each round to keep things interesting.

Examples? Of course I brought examples!

Language in this first one…

Here we’ve gone from “three blind mice miss their tails” to “Three blind mice versus the martians.” I think it has summer blockbuster potential. You cans see the progression, though. It’s… interesting.

This one made my dad laugh harder than I’ve ever seen before. We went from “Wendy thinks Sean Connery is hot” (which is the sentence my dad wrote) to “The Titanic had seasick Ghostbusters at a reasonable temperature, broken bits of thing made it snow on Santa, who looked a bit like GIR,” which he had to read out loud. 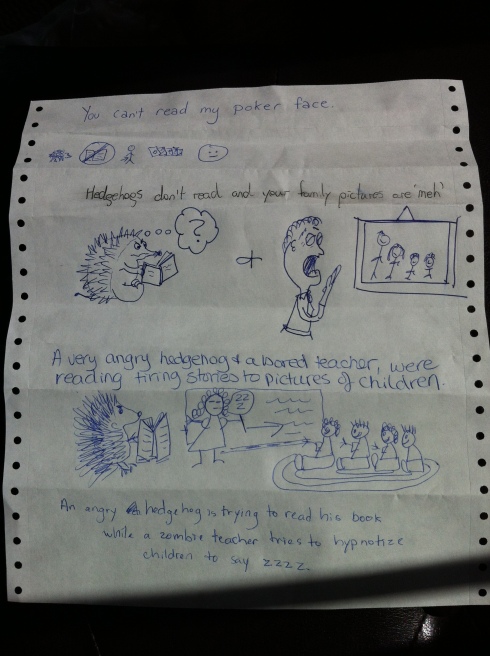 “You can’t read my poker face” became “An angry hedgehog is trying to read his book while a zombie teacher tries to hypnotize children to say zzzzzz.”

OK, so it’s funnier when you’re involved in the game. Really, give it a try ASAP. Good times.

Well, we preserved the zombies, anyway. So to speak.

Yes, there is a board game something like this, the totally-less-interestingly-named Cranium Scribblish. But why would you want to do that when you can have hilarity like this at a fraction of the cost? And also, you get to say “Eat Poop Now Cat” to your friends. Wicked icebreaker.

If any of you do try this out, please, PLEASE share your results and report back to me!