When I was a kid, socks were the worst Christmas gift ever, except for maybe underwear, especially when opened in front of OTHER PEOPLE OMG THE HORROR. But really, socks were pretty low on the list of Things That Make Great Gifts for Me.

Now? I got seven pair of socks from my husband for Christmas, and it was fan-frigging-tastic. 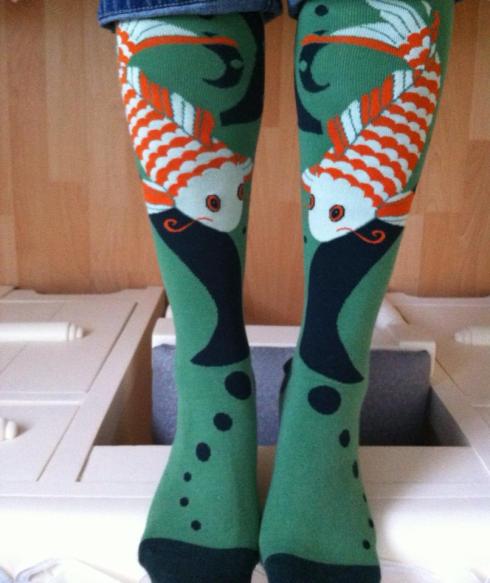 Guys… we’re talking DRAGONS. Red ones, too, which is kind of perfect for me.

These are all from Sock Dreams, by the way, which is a fantastic website to waste hours on if you’re like me and think fancy socks are just the bee’s knees (or the dragon’s Volkswagen, as the case may be). You can make a wish list while you’re there, too. Mine just got a bit shorter when I ordered four more pair (don’t judge me, it’s an investment to make the ones I have last longer), but it’s still pretty great. I really need those whale and ship ones…

I’ve been informed that I can’t buy the BITCH socks. I say that I need to be able to say “Watch out people, I’ve got my bitch socks on today!” and mean it, but I suppose that’s a bad idea now that the kids can read.

Anyway, I owe an update. I missed Wednesday, but not because I wasn’t working. Things are actually going really well– or they were when the kids were in school, anyway.

EDITING: I did a little restructuring that cut some words and made the story a bit tighter. Didn’t remove as many words as I’d like, but we’ll see how that looks when I read over it. Only one more big thing to fix (involving gender-flipping a character, which I think will be fun). Otherwise, there’s just regular old editing and hunting for pesky over-used and unnecessary words. I got the ms under 110,000 words. We’ll see how much more I can do. Also, Project Semicolon Elimination was a near-complete success. I think there are four left in the entire book, down from… well, hundreds. I lost count.

READING: So, I read that ARC I said I’d read. I’ve been a little nervous about promising reviews on books, because I’m an honest reviewer and I’ve been disappointed in the past (not by any of my readers here, though, just so’s you know). No worries with this one! I’ll review here on the blog next month. Super good book, I’m so glad I did this.

OTHER STUFF: I’m the best wife ever today. I’ve got a pot roast in the slow cooker (thanks to the meal planning I did last weekend), I made chicken salad for AJ’s lunch tomorrow, the kitchen is clean, laundry’s in… lots of good stuff. I still wasn’t able to exercise much this week, but I got Jack out for a walk the other day. Yaaaaaay… Hey, it’s something. And I’m seeing a chiropractor on Tuesday. I’m just a little excited about that, let me tell you.

So there you go, another update. I know, the blog is all updates and Engrish right now. Things will get more content-y soon, I promise.

So, what’s new with you?

Kate Sparkes was born in Hamilton, Ontario, but now resides in Newfoundland, where she tries not to talk too much about the dragons she sees in the fog. She lives with a Mountie, two kids who take turns playing Jeckyll and Hyde, two cats, and one chihuahua. USA Today bestselling author of the Bound Trilogy (mature YA Fantasy) and Into Elurien, writing dark, decadent, and deadly Urban Fantasy as Tanith Frost. www.katesparkes.com www.tanithfrost.com END_OF_DOCUMENT_TOKEN_TO_BE_REPLACED
This entry was posted on Sunday, January 19th, 2014 at 2:01 pm and tagged with #ROW80, Bound, cats, dragon, editing, fantasy, koi, socks and posted in domestic goddess stuff, Dragons, Product Reviews, ROW80. You can follow any responses to this entry through the RSS 2.0 feed.
« From the “Boy Aisle” at Rossy…
Gros Morne Magic »