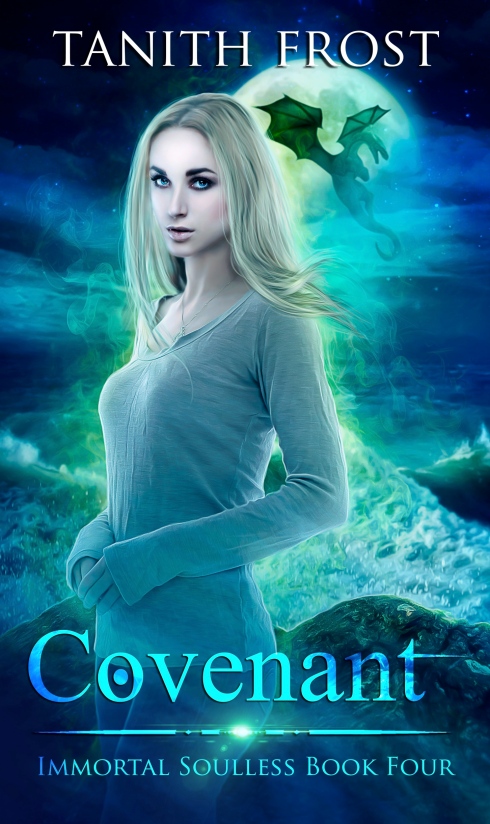 Tame the dragon. Close the rift. Don’t trust anyone.

Aviva’s new assignment sounds like something out of a fairy tale, except this time the damsel has been tasked with guarding the dragon. Though he’s plenty to deal with all on his own, it soon becomes clear that this monster trapped in human form is the least of her worries. The open rift that brought him to Earth threatens the veil of secrecy protecting the supernatural world, and the vampires of Maelstrom need to find it before they’re exposed. Worse, it seems that they may not be the only ones hunting for it. If the strange power that flows through the rift falls into the wrong hands, it could spell disaster for Aviva and everyone she cares about.

With only a shifty dragon-man and an inexperienced enchantress by her side, Aviva races to find the rift before the enemy does—a task that only grows more challenging when she uncovers a trail of deception and lies that leads straight to the highest ranks of her clan.

The Immortal Soulless series continues in Covenant, and it’s only getting more exciting! Don’t forget that book one, Resurrection, is available for 99 cents (ebook format), but only for a limited time. That makes this the perfect time to start your summer reading binge! If you like your vampires bloodthirsty, your villains murderous, your shifters too hot for anyone’s own good, and your urban fantasy soaked in dark powers and deep mysteries, this just might be the series for you.

(Bonus points if you like your paranormal activities happening in Canada!)

Have fun… and prepare to lose some sleep. Don’t say I didn’t warn you.

Bound (Bound Trilogy Book One) FREE for a limited time!

I know, I know. Too much promotion here these days, right?

I promise I’ll be back with something else when I have anything interesting to share with you. Right now I’m buckling down, trying to avoid wasting time on social media, and working on getting the first three books I’ll be releasing under my pen name ready for publication. There’s a lot going on here… it’s just behind the scenes.

I do have one bit of excitement to share, though! For the first time ever, Bound is free on all of its regular ebook retailers! Whether you read on Kobo, iBooks, Nook, Kindle, or those smaller ones whose names I can never remember, I’m giving the ebook away.

I wish I could say I had a big strategic reason for doing this, but honestly? It was the end of winter, I was in a funk, and not much lifts my spirits like giving something away. And between this and the paperback giveaway I just wrapped up with my newsletter type people*, I’m having a pretty good time.

Besides, we’re coming up on Bound’s third anniversary as a published book. Why not invite some new people in to explore this world and get to know my beloved characters?

So if you haven’t started the series yet, check out the links at books2read.com/bound. If you have read and enjoyed these books, why not offer a recommendation to a book-loving friend? This offer is only going to be on for a few weeks, and when it’s over, I don’t know whether or when it will happen again. 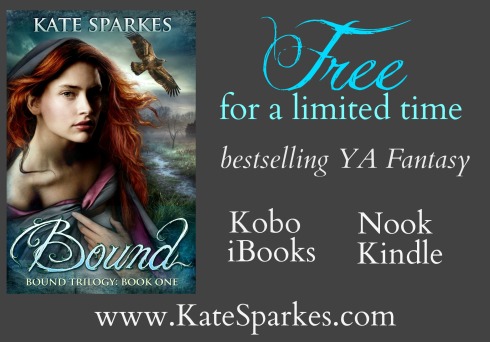 *Newsletter subscribers get the VIP treatment. Giveaways, bonuses, free stuff… want to join in? Visit my site to sign up, then watch your inbox (or spam folder) for the confirmation email. Add me to your contacts so you don’t miss anything, and enjoy!

Over a million words from sixteen best-selling Fantasy authors, including the legendary Mercedes Lackey…

I know. It’s crazy. Insane. Bonkers, even. But the Fierce box set is available now, and for a limited time at this fantastic price! 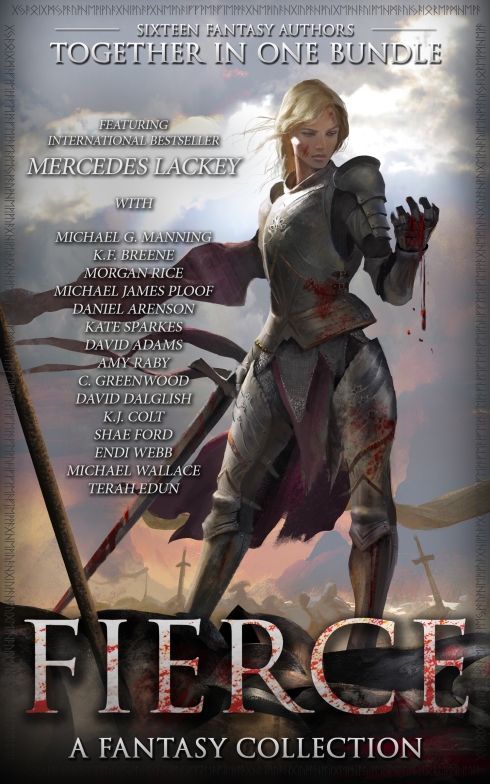 Already grabbed your copy? Want to help an author (or sixteen) out? If you’ve reviewed Bound in the past and have a minute to copy and paste your review onto the Amazon page for Fierce, it will be a big help for the set. You don’t have to have read the rest of the stories, though I hope you will enjoy them–I know I can’t wait to dive in! Reviews help the set’s visibility on Amazon, and will help with advertising through other venues.

This is a pretty please with a cherry on top. 🙂

BIG thanks to everyone who pre-ordered!

Here are the details, in case anyone missed them when I first announced the set:

Mercedes Lackey – Moving Targets
Stuck watching over four Herald trainees on circuit, Elyn is at her wits’ end–and that’s before a town asks for help with a ghostly infestation.

Michael G. Manning – The Blacksmith’s Son
A journey to discover the secrets of his past reveals a magical heritage and embroils Mordecai in a deadly battle for the future of mankind.

K.F. Breene – Chosen
Prophecy has foretold that when war threatens the world, the Chosen will appear to help the Shadow Warriors reclaim their stolen freedom and lead them out of the Land of Mist.

Morgan Rice – A Quest of Heroes
Thorgin, an outsider and a dreamer, fights to become a warrior in an epic quest that finds him at the center of a maelstrom of royal plots and counterplots that threaten him and everyone he loves.

Michael James Ploof – Whill of Agora
When Whill learns the truth of his lineage, he sets out to face his father’s murderer, but what he learns along the way will change his life–and the realm–forever.

Daniel Arenson – Requiem’s Song
Weredragons, men call them. Monsters. Cursed ones. People who can turn into beastly reptiles. Together they will forge a nation.

Kate Sparkes – Bound
When a young woman accidentally saves the life of an enemy Sorcerer, she finds herself drawn into a world of magic that’s more beautiful, more seductive, and more dangerous than she ever imagined.

David Adams – The Pariahs
Two sellswords–a half-elf and a half-orc–find their war over before it even begins. But trouble is stirring on the home front, conflict which threatens more than just their lives.

Amy Raby – The Fire Seer
Taya must use her fire visions to investigate a series of murders, but the Coalition of Mages has partnered her with her old nemesis, the man who used to bully her when they were young.

C. Greenwood – Magic of Thieves
In a province where magic is forbidden, young Ilan, born with the powerful gift of her ancestors, has only one hope for survival–concealment.

David Dalglish – The Weight of Blood
When half-bloods Harruq and Qurrah Tun pledged their lives to a death prophet, they only sought escape from their squalid beginnings. Instead, they become his greatest disciples, charged with leading his army of undead.

K.J. Colt – Bear Heart
In the savage lands of Ruxdor, young Klawdia must fight the champions of four rival clans to defend her future as the first female chieftain.

Shae Ford – Poison
A bandit girl is taken from her home and thrust into a complex world of lords and ladies, where she learns that she must kill to survive.

Endi Webb – The Maskmaker’s Apprentice
Masks of legend. Masks of power. Those who dare to wear them trifle with the old powers and risk ruin and mayhem. But a young apprentice maskmaker cannot contain his curiosity, and accidentally unleashes a deadly terror upon an unsuspecting world.

Michael Wallace – The Dark Citadel
A slave boy and a young queen lead an alliance of spies, servants, and merchants to stave off the encroaching armies of a dark wizard.

Terah Edun – Blades of Magic
As an unstoppable war breaks out, a young girl enlists in the military to unravel the secrets surrounding her father’s execution.

Forgive my excitement, I’m new to the e-reader thing.

Yes, I finally have an e-reader. No, my books aren’t jealous; we had a little talk about how much I love them, and how no machine will ever take their place in my heart. An e-reader will never feel the same, or smell the same, or give the same experience, but I am excited about it for several reasons.

Most of those reasons are books. Specifically, cheaper books. Also, the ability to carry them around without breaking my shoulder with my bag.

My mom passed her kobo on to me when she got a new kobo mini for her birthday (isn’t that awesome? Thanks, mom!). This newfangled contraption still seems a bit strange; it’s so light, it feels like it’s going to snap in half. It’s like one of those fake TVs they have at Ikea, but it’s real. It works. I know, I have an account and TWO WHOLE BOOKS HOLY CRAP TWO BOOKS.

And I’ve been waiting for a while to get these books.

Blogging’s fun, isn’t it? (I am going somewhere with this…) You get to meet other writers, and some of them have books you can buy! And read! Yay! So my first two purchases were books by bloggers I follow here on WordPress. In no particular order (with links!):

Born In Flames by Candace Knoebel

Whee! For less than $15, I have two new books to read that. No wait time, no shipping fees, cheaper than paperbacks. No, e-books are not real books, at least not as I think of them. But they’re real stories, and that’s what I’m paying for.

If you’re wondering, yes, I’ve already discovered books I can’t get through kobo; looks like I’m going to have to get Robertson Davies’  the Deptford Trilogy as a real book off of Indigo. I would have wanted them as a “real” book anyway, but it would have been fun to have them available this way. On the other hand, look how adorable it is when it’s sleeping! Aww… I can’t stay mad at that little face. 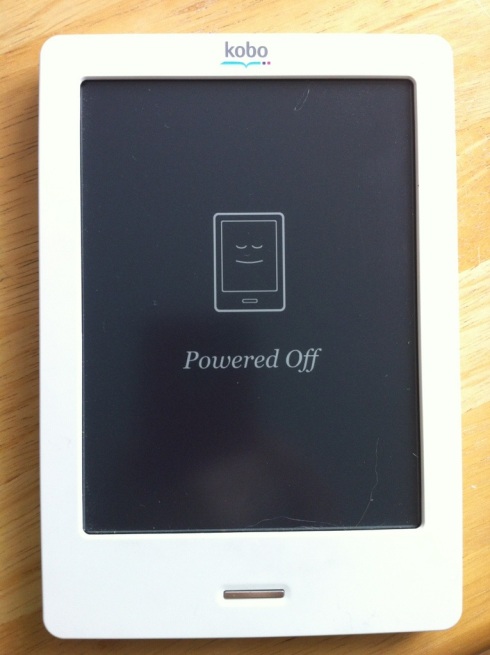 EDIT: I did it, I read a whole book on the kobo! Imminent Danger was way too much fun for you. You couldn’t handle it. I don’t usually read sci-fi, but I really liked this one. Recommended. Yay!

EDIT 2: OMG the free books that there are!