Yes, folks, it’s time for another Engrish post. Nothing new the last few times I’ve been to Rossy (and really, I only go for you guys), but I have some saved from before. It’s not sensible rationing or intelligent forethought so much as the fact that this one was too good to dilute with other contributions in the last Engrish post. Also, the demon-fairy that appeared when we read that one out loud has been causing problems , and we didn’t want to risk that again.

We’ll be going back to Barbie knock-offs today, though I have a few ponies, cars and trucks for another day. Oh, the muddled bounty!

Pole-dancing fairies. Collect them all!

OK, so that wasn’t true Engrish as much as a WTF cheap doll moment, but she is riding that massive staff like a boss*. You go, fairy!

I’ve heard that one before. STOP PRESSURING ME! 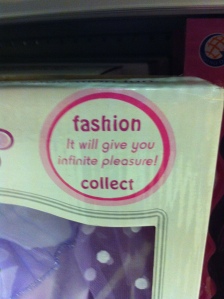 Yep, I’ve heard that one before, too.

Infinite pleasure is a HUGE thing on these boxes. It’s both promising and disturbing.

You know, I want to say that I’ve heard that before, but nope. This is completely new to me.

But still, is anyone else starting to think that “I’ve heard that before” could be the new “that’s what she said?”

And last but not least (not that there’s any objective way to rank this stuff), we have Simple happy DIY beauty hair! YESSSSS! You know, I wish I had more toys that would let my imagination. Or let me imagination, depending on how you read that. Also, no one ever offered me infinite space when I was a kid, and I’m kind of upset about that. It’s not infinite pleasure, but it’s something.

ENJOY THIS HAPPY TIME WIHT YOU

Oh, and this is for Jae at Lit and Scribbles. Just when you thought they couldn’t get any cheaper… DRUNKEN FLOOZIE PLAYSET IS ON SALE! (Here’s their first appearance her at DtP)

Gutter and wine coolers not included.

Kate Sparkes was born in Hamilton, Ontario, but now resides in Newfoundland, where she tries not to talk too much about the dragons she sees in the fog. She lives with a Mountie, two kids who take turns playing Jeckyll and Hyde, two cats, and one chihuahua. USA Today bestselling author of the Bound Trilogy (mature YA Fantasy) and Into Elurien, writing dark, decadent, and deadly Urban Fantasy as Tanith Frost. www.katesparkes.com www.tanithfrost.com END_OF_DOCUMENT_TOKEN_TO_BE_REPLACED
This entry was posted on Thursday, May 2nd, 2013 at 10:35 am and tagged with Barbie, dolls, engrish, knock-offs, Rossy and posted in Engrish, Funnies, Photos. You can follow any responses to this entry through the RSS 2.0 feed.
« Daily Dose of Happy
I’ve Been Bitten »